Grain in hand, heart at ease 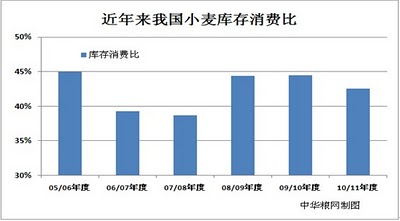 "If you have grain in your hand, then your heart can be at ease." This proverb is constantly quoted in articles on the importance of grain policy.

A China grain net article offers reassurance that the drought affecting wheat is no reason for panic because the government has built up big stocks of grain that it can use to stabilize the market. The government's big grain reserves are described as a "silent weapon" already in use in fighting the global "grain war."

According to the article, China's stocks-to-use ratio for wheat has exceeded 40% in recent years, far above the global ratio. In 2010, the state's cumulative purchases of wheat, corn and rice for reserves totaled 24.58 mmt, and rapeseed and soybean purchases totaled 10.28 mmt.

In 2010 the government aggressively sold grain reserves into the market to stabilize prices. There were 180 grain auctions of rice, corn, wheat (including imported wheat), and soybeans totaling 80.8 mmt sold. In addition there were 2.8 mmt of special sales and 4.26 mmt of inter-provincial transfers to bolster grain reserves in grain-consuming regions.

As proof of the government's ability to stabilize prices, the article points out that global wheat prices have shot up nearly 50% since December but China's cash prices rose only 5%. Futures prices have risen about 16%.

The wheat strategy of “self-sufficiency + state reserve adjustment + small foreign trade” will not change for the foreseeable future.

Preserving grain supply and stabilizing grain prices are important matters for the nation's economic development and social stability. If you “have grain in your hand” then you can have “no panic in your heart.”
Posted by dimsums at 10:14 PM