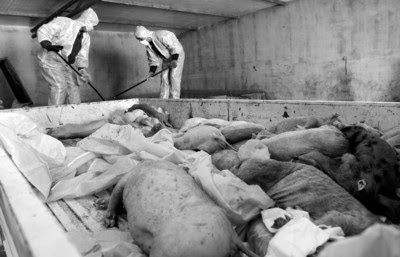 This blog has reported a series of crackdowns on underground butchers who sell meat from dead pigs. These operations are surprisingly resilient and hard to stamp out. Their prevalence reflects the large number of dead pigs and widespread disease problems. In discussing this issue, a recent newsletter on the Chinese pork industry says the death rate is about 30 percent. Officially, farmers are entitled to compensation for disposing of dead pigs but that probably requires a troublesome application process and probably less money than selling to a butcher. These stories provide a window into China's inner workings that give insight about the country's severe food safety and sanitation problems.

Authorities in Liaoning Province's Shenyang City broke up a "black den" where dead pigs were butchered, and the meat was dyed, packaged and labeled. This one was described as "especially large" purveyor of pork from pigs that had died of illnesses. The authorities discovered 149 dead pigs, dyes, other additives and 20 tons of industrial salt.

On February 21, Faku County police stopped a suspicious van and discovered that it contained 27 dead pigs that had mostly died of blue ear disease and another kind of bacteria. They determined that the truck was bound for an illegal slaughterhouse in a village near Anshan City. The slaughterhouse was located in a secluded area on a small street in Victory Village, hidden behind a 2-meter wall.

The dead pigs were found in a 100-square-meter warehouse. Dead pigs were delivered here, then soaked until the skin could be peeled off. Workers added dye, an extender, industrial salt, packaged the meat in cellophane and stuck on a label.

Faku County police said this slaughterhouse had been operating illegally for over two years. They raided it last year and assessed penalties, but it continued its illegal activities. The person responsible for the slaughterhouse had run off and had not been apprehended. The truck driver and his wife were arrested and confessed.
Posted by dimsums at 4:19 PM