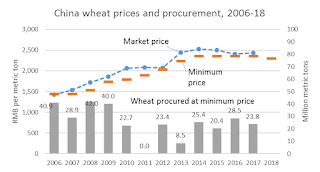 The Chinese government has purchased over 20 million metric tons of wheat each of the last four years to maintain the minimum price. According to China's Grain Reserve Corporation, 23.8 mmt of wheat was purchased from the 2017 wheat crop as of Sept. 30. That equals 18.5 percent of the entire wheat crop and one-third of the 72.1 mmt total of all wheat procured.

By removing large volumes of wheat from the market and storing it, Chinese authorities are holding the price far above the price that would be dictated by supply and demand. Authorities acknowledge that they are holding large stockpiles of wheat, but have not revealed how much they have.

Authorities called for "improvement" of the minimum purchase price policy for wheat and rice in the "Document No. 1" released at the beginning of the year. A propaganda report on price reforms during Xi Jinping's administration issued this month hailed progress toward market-determined prices and singled out agricultural commodities and irrigation water among five remaining commodities and services needing further market reforms (others were electric rates, natural gas, transportation, and medical services). The propaganda report explained that this year's reduction in minimum prices for rice were a signal that reform is needed to deal with rising rice and wheat inventories, divergence between domestic and international prices, and reduced market vitality. The report promised reforms of the minimum price program to make it more responsive and flexible.

After the modest 2.5-percent reduction just announced, the wheat price in China would be still about $9.44 per bu., about double the price received by U.S. farmers for winter wheat this year. It is also far above the U.S. Gulf price. 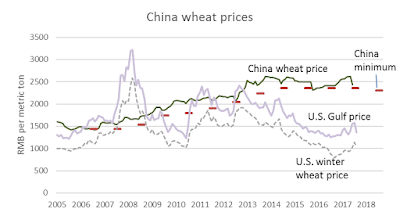 The Ministry of Agriculture's September commodity S&D report said wheat imported at the 1-percent in-quota tariff cost RMB 2140 per metric ton during September, 820 yuan less than the price of good quality domestic wheat. Imports of wheat for January-August 2017 totaled 3.18 mmt. The Ministry's report described wheat markets as having tight supplies and rising prices, "due to the relatively good quality of this year's wheat crop, active purchasing by processors, and support by market intervention purchases."
Posted by dimsums at 8:47 PM