The Chinese press has started taking note of soaring mutton prices, up about 30 percent from last year and now the most expensive type of meat in China. Mutton is being affected by broadly rising costs like other foods, but expensive sheep meat is also linked to a new policy to conserve grassland initiated last year.

Sheep meat is traditionally a staple food of poor nomadic minorities in Inner Mongolia and other grassland areas. In recent years it has become popular as the main component of hot pot restaurants, kebabs served by street stalls and restaurants serving ethnic Muslim and Mongolian cuisine. National Bureau of Statistics data on average food prices show that mutton is now the most expensive meat, costing over 50 yuan per kg, equal to about $3.50 per lb. (see chart below). 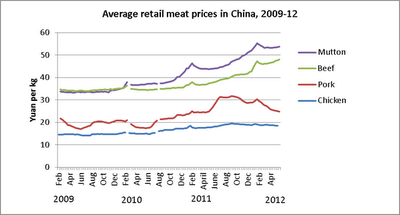 The NBS data show mutton costing double the price of pork in May. But an article from Tianjin says mutton costs 60 yuan per kg there and you can buy three jin (500g) of pork for the price of a jin of mutton. The article calls mutton "unaffordable." Even in Inner Mongolia, a major sheep-producing region where mutton is a big part of the diet, the average price during the first quarter was 47 yuan/kg, up a third from last year. In Inner Mongolia some people are substituting pork for mutton in traditional dumplings. They're cutting back in other ways too. At a market in Tianjin, a vendor says that people who used to buy 3 jin now buy just 2.

At a wholesaler's shop in a Tianjin market, a dealer busy cutting up meat says he buys legs of mutton at 19 yuan per jin, about 2-to-3 yuan more than last year. After removing bones and other waste, the remaining edible meat costs him 28.3 yuan per jin and he sells it for 28.5 yuan, a gross margin of just 0.2 yuan per jin. He thinks he can make a small profit by selling the bones.

The Tianjin wholesaler's helper holds up a leg of mutton and says, "We don't eat mutton ourselves. We work a whole day and don't earn enough to buy a jin of mutton."

Mr. Mu, a dealer with 10 years in the business, explains that he pays 10,000 yuan a year for stall rent in the market and each of his workers costs 1000 yuan per month. His profit margin on a sheep is 8 yuan and he sells about 10 a day, just 80 yuan per day. He says he has been losing money lately but is not inclined to raise prices for fear of alienating his regular customers.

The retail price increases include rising costs of fuel, wages, and other costs. In Inner Mongolia the cost of raising a sheep doubled from 2009 to now, from 200 yuan to 400 yuan. There are also fewer young people available to raise and slaughter sheep due to outmigration.

But the main factor seems to be a shrinking supply of sheep. A grassland ecological award system announced in June 2011 gives subsidies to herders who reduce the number of animals they graze on grasslands. The number of sheep in Inner Mongolia decreased from 97 million in 2009 to 87 million this year. The program moves animals from the traditional nomadic mode to raising sheep in pens and barns. The percentage of sheep raised in confinement is expected to rise from 30% to 70% within a few years. The new mode of production has higher costs that include barns, wells with electric pumps, and feed.

Demand for meat has been rising and China has also been exporting more sheep. According to one official, Xinjiang has been buying more sheep from Inner Mongolia, reducing the supply available for local processing. Slaughter plants in Inner Mongolia reportedly are operating at 30 percent of capacity.

Interviews with restaurants around Tianjin found that they have not been raising prices yet. A restaurant manager says they do not change menu prices frequently. This is the low season for mutton-based hot pot and kebabs, so volume is relatively low now and there isn't as much pressure to raise retail prices. If mutton keeps rising restaurants may have to adjust menu prices.

The price increases hit Mongolians, Muslims and other minorities harder because sheep are such an important part of their diet. A Mongolian lady whose family customarily eats four sheep during the winter says, "We must eat mutton, so we have to cut back on other expenses."

An economist from the Inner Mongolia academy of social sciences recommends giving temporary subsidies to school cafeterias in Inner Mongolia, but he acknowledges this is only a temporary solution. In the end, only "technology" can produce more sheep and reduce costs.

Sheep are another example of the clash between China's rising living standards and its limited natural resources. Chinese authorities are finally acknowledging the ecological damage due to maximizing food production without regard for effects on future productive capacity. But as farmers cut back on the pillaging of soil, water and grasslands Chinese consumers face higher prices. Moreover, the shift from traditional low-capital-input extensive farming modes to intensive farming raises costs that are passed on to consumers.

Welcome to the 21st century and the concept of scarcity.
Posted by dimsums at 10:53 PM