A new registration system for milk powder products in China is aimed at paring down the bewildering number of formulas and brands that crowd retail shelves, news media say. 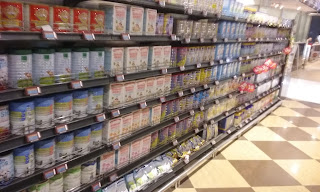 New regulations announced last October require milk powder producers to register with China's Food and Drug Administration before the regulations come into force January 1, 2018. Companies will be permitted to register no more than 9 milk powder products: up to 3 milk formula lines, each with up to 3 formula products. Companies with R&D, inspection capacity, and their own production equipment are permitted to register.

CFDA recently announced approval of 89 milk formula products submitted by the first set of 22 companies to register. Two more rounds of registration are expected before the January 1 deadline.

China Economic Times says the regulation is aimed at reducing the excessive number of brands and products. Statistics show there were 103 infant formula producers offering 2000 different formulas in the Chinese market. Some companies paste labels on cans of milk powder produced by others.

The so-called "strictest new policy" does not allow companies to market products through agents, prohibits sticking labels on products, limits raw material to cow and goat milk, requires companies to use their own production processing facilities and demands that fresh milk used in powder must come from the company's own "production base." 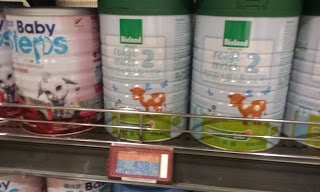 A Peoples Daily article earlier this year, "Are Domestic Dairy Companies Ready?" suggested that the regulation is aimed at consolidating and strengthening the domestic infant formula industry as the two-child policy allows more births which creates greater demand for the product. According to the article, domestic companies are not benefiting as expected from vigorous demand.

By weeding out weak and untrustworthy suppliers, the regulation is expected to raise the profile of remaining domestic suppliers. Peoples Daily suggests that the regulation is intended to weed out companies whose business focuses solely on marketing, leaving companies that produce quality products. According to Peoples Daily, 200-300 small and medium companies already quit the industry in 2016, largely because of the new registration requirements. They expect more exits.

The new regulations are to be applied equally to foreign and domestic suppliers. According to Southern Metropolitan News, some observers were surprised that foreign brands accounted for only 20 percent of the initial set of approved formula products. Some industry insiders think the regulations are tilted toward strengthening the position of domestic companies in an industry where foreign brands are most popular. An industry association official says that foreign companies have taken longer to register because they have less knowledge about the process and it takes them longer to assemble and notarize paperwork. Others say many companies are holding back and watching to see how the leading companies cope with the new requirements.

Southern Metropolitan News suggests that some companies were eager to be in the first batch of approved companies to gain approval from consumers. Others say the first set of companies are not necessarily the best ones and they expect any advantage from being among the first to register will fade quickly.
Posted by dimsums at 8:06 PM No comments:

There were few changes in supply and demand estimates by China's Ministry of Agriculture in August with harvests for major crops about to begin in coming months.

The 2016/17 estimate of corn imports was raised by 200,000 mt to 1 million metric tons. According to MOA, the corn auctioned from reserves has not met demands of processors, so some switched to imports. As of yesterday's auctions, 40 mmt of corn had been auctioned from China's reserves since May. However, the MOA balance sheet estimates that the supply of corn for 2016/17 will still exceed consumption by 9.7 mmt.

MOA revised its estimate of 2017/18 corn  yields downward due to pest problems in certain areas--although the yield is still historically high. Corn production for 2017/18 will fall to 210.7 mmt, and consumption will exceed supply by 3.17 mmt in the coming market year, according to the MOA estimates.


MOA made no changes in the soybean S&D.

Estimated cotton output for 2017/18 was adjusted upward to 5.28 mmt on both increased area and higher yield. Imports will be only 1 mmt, and consumption will exceed supply. The ending inventory will fall further to 7.46 mmt in 2017/18.


MOA raised its estimate of 2016/17 soybean oil imports to accommodate increased demand from a growing stream of rural-urban migrants discovered by the National Bureau of Statistics in its report on economic growth for the first half of 2017. Exports of edible oils were raised due to increases in sales of specialty oil products.

Rice and Wheat Support Price Policies Up for Reform

A Chinese official signaled that a major reform or even elimination of the country's price floor policy for wheat and rice may be on the horizon, but an official media outlet assured farmers that they need not worry about a drastic policy change that will curb their rising incomes.

In remarks at a rural policy forum held in Beijing, Han Jun--head of the Central Communist Party's Rural Leadership Group--praised the grain price support policies for their role in ensuring food security and protecting farmers' incomes, but he raised concerns about unintended consequences in the current market environment where international prices are far below China's domestic support price levels. Han despaired that the government's financial burden is overwhelming as it holds massive inventories of grain and sells reserves for less than the acquisition cost. High prices in China have eroded the international competitiveness of its commodities, and the gap between Chinese and international prices has prompted a surge of imports and smuggling. Han commented that this cannot continue, and the support price program has now reached a point where it is not immune to change. 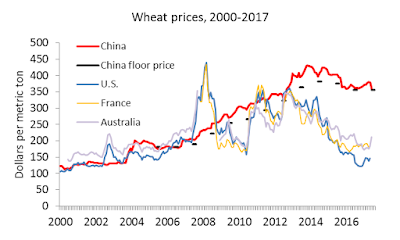 Han observed that purchases of grain for government reserves strayed from the original intent of intermittently stabilizing markets to becoming the predominant sales channel. Controlled prices and surging government purchases have decoupled supply from demand and created structural grain surpluses. Han pointed to corn as the commodity with the most pressing problems: in 2014, purchases for the government's "temporary reserve" accounted for 88 percent of corn produced in the northeastern provinces. In 2015--the corn program's final year--reserve purchases ballooned to 125 percent of corn produced in the northeastern provinces as corn from other regions was trucked in to take advantage of the government-set price. Han said 100 million metric tons of corn substitutes imported from 2014 to 2016 were partly responsible for the unintended growth in excess corn reserves. He also cited price supports for prompting smuggling of rice.

Reform of the minimum price program for rice and wheat would be the latest phase of a series of "marketized" price reforms that have been "very smooth," with "results better than expected," Han said. Price reforms began with the abandonment of support price policies for cotton and soybeans in 2014, continued with the reduction of the corn support price in 2015 and the corn price support elimination in 2016. Rapeseed support prices were abandoned in 2015 and excess rapeseed oil reserves have been disposed of, Han said. 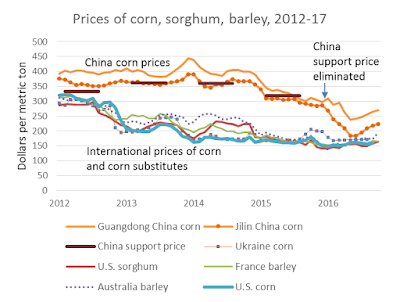 Han did not give any details on the prospects for policy changes or when they might take place. The next clue about the program's future may be this fall when Chinese authorities customarily announce the wheat floor price for the following year in late September or early October. There was speculation about the possible end of the minimum price program ahead of last October's announcement, and looks like there will be again this year.

The day after Han's comments were reported, a commentator on the "voice of rural China" assured listeners that they need not worry about rumors about the end of grain price policies, because no changes have been announced by the government. The commentator suggested that rumors circulate because the government doesn't provide any information about their intentions. The commentator then argued for the necessity of agricultural price reforms, assured farmers the government would carefully consider the impact of policy changes on "farmer friends," and warned farmers that short-term pressure is a necessary impact of market competition.

Dr. Han did not mention his past endorsement of the policy strategy that created the problems. In a 2010 interview with Farmers Daily, Han said it was necessary to raise farm prices every year to ensure that farmers could earn a healthy net return as their production costs rose, and high farm prices could be seen as a way of "industry repaying agriculture." Back in 2010, he proclaimed that the world was in an era of permanently high prices.

Seven years ago Han said, "When China has a shortage of grain, the world cannot meet China's demand." This week Han implied that the world is supplying China with too much grain.
Posted by dimsums at 9:13 PM No comments:

The Ministry of Agriculture reports that China's agricultural imports surged to $61.2 billion in the first half of 2017, while agricultural exports were $34.9 billion. The value of imports was 14.5 percent ahead of the same period last year, and exports were up 3 percent. Oilseeds were the largest agricultural import category, valued at $20.8 billion in H1 2017. China also imported $2.7 billion in edible oils. Oilseed and edible oil imports were both up more than 26 percent from last year. Livestock imports were $12.4 billion, up 6.5 percent from a year ago. China has trade surpluses in aquatic products and vegetables. (The statistics do not report a number of processed foods, beverages, and live animals.)


Grain imports were valued at $3.3 billion in H1 2017, and totaled 13.7 million metric tons. Wheat and barley imports were up sharply, but corn and sorghum imports plunged. The volume of rice imports was up 6.5 percent to 2.1 mmt.

Imports of distillers dried grains--hit with antidumping duties imposed by China--sank 77 percent from a year ago. Cassava imports fell 6.5 percent.

The volume of soybean imports was up 16.2 percent to 44.8 mmt during H1 2017. Rapeseed imports totaled 2.6 mmt, and rose 32 percent from last year. Palm oil, rapeseed oil, and soybean oil imports were up sharply, but sunflower seed oil imports dropped.

Pork imports declined as domestic pork prices fell this year to levels substantially lower than record-highs reached in 2016. Beef, lamb, and milk powder imports were up in H1 2017.

Posted by dimsums at 6:35 AM No comments: