A recent article from Xinhua News Service describes a Heilongjiang breeding farm's preservation of Min pigs, one of China's native swine breeds. The article reveals the tensions between commercialization of the pork industry and conservation of disappearing local breeds.

China had dozens, perhaps hundreds, of native swine varieties that have nearly disappeared as lean-type breeds from Europe and North America displaced them. The Min Pig (民猪) is one of China's most prominent native breeds. 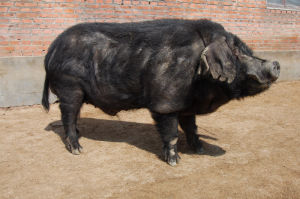 The Min pig is native to China's northeast. Over several hundred years of breeding and adaptation to the harsh climate of the region, it developed a tolerance of cold weather and ability to consume coarse feeds. It is estimated that there were 8.5 million Min pigs in the 1930s but their numbers declined over the course of the 20th century. As early as 1963 Israeli scientist H. Epstein's Domestic Animal Breeds of China said there were only a few Min pigs in remote villages of Jilin Province. A conference in 1982 estimated there were an estimated 10,000 or so left in the northeastern provinces.  According to Xinhua, "pressure" from foreign breeds peaked in the 1990s and there were only 100 or so Min sows left at the end of the decade.

The Lanxi County Pig Breeding Farm in Heilongjiang Province is conserving and breeding the Min pig with "foreign" pigs. The farm has 430 breeding pigs and 170 cross-bred sows.

Chinese experts praise the strong fragrance and flavor of pork from the northeastern Min pigs. The muscle is marbled with fat. The Min pigs are said to be more resistant to disease than other types of pigs. In studies, Min pigs had lower incidence of piglet diarrhea than a "control group." They can be raised with fewer pharmaceuticals and are promoted as "healthy," "green" food.

Despite the purported advantages of pork from Min pigs, an official from the breeding farm notes that conservation of the breed has been difficult since the market for pork from Min pigs has been weak. The Min pigs have a lower proportion of lean meat, grow more slowly than "foreign" breeds and can't satisfy demand for pork. The farm official says the breeding farm subsidizes its Min pig herd with profits earned from selling "foreign" breeding animals from Yorkshire, Landrace and Duroc stock.

As Chinese peoples' living standards rise the niche market for pork from native breeds is coming back to life. Many Chinese consumers complain that lean pork has little taste and prefer the strong flavor and smell of pork from min and other native breeds. There are also other purported benefits. The Min pig pork is said to be easier to chew and digest.

Rather than just warehousing native breeds, there is an attempt to commercialize their production. In Lanxi County there are about 2000 farms in two dozen villages raising Min pigs. They have certifications as a "pollution-free" product and a "geographic indicator." A sales network retails the pork in supermarkets and restaurants located in Heilongjiang and Beijing, 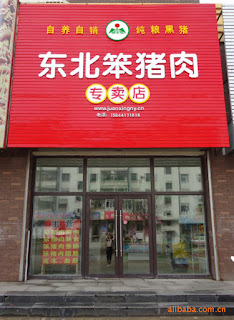 In reality, breeds are constantly changing and "native" is a relative term. The Min pig is the descendant of black pig varieties brought to China's northeast about 300 years ago by human migrants who moved there from the overcrowded north China plain.Over time, the black pigs adapted to the cold, harsh climate of northeastern China by developing layers of fat and growing thick hair during the winter. Their digestive systems probably adapted to the coarse fodder available there. The adaptations permitted pig production in a harsh climate. However, in today's industrialized pork production model the slow growth of min pigs -- wasting energy on producing fat and extra hair -- raises cost. A professor from Northeast Agriculture University estimates that the feed conversion ratio for Min pigs is 4:1 versus 3:1 for "foreign" breeds. The ability to consume coarse forages is irrelevant when feeds from corn and soymeal are available.

The infusion of European-type swine to China is not new. Epstein's 1963 catalog of Chinese breeds described a "Harbin white" breed that had been developed by breeding Large White stock (brought from nearby Russia in 1896 and later from Canada) crossed with "primitive local stock" (probably a type of min pigs). Epstein also described a "Jilin Black" bred from Min pigs and imported Large White and Berkshires in the 1920s and a "Shanghai White" bred from indigenous Meishan and imported Large Whites. Note that Heilongjiang was part of Russia and Shanghai was a European enclave in the early 20th century.

Epstein noted that purebred Large White pigs were "unaccustomed to the cold climate and rather sparse feed available in Harbin." He also described "very primitive" pig breeds in northwestern Heilongjiang, an area he described as "pure pasture...with a little agriculture restricted to millet, barley, soya bean and wheat." The pigs were small and took 2 years to reach a suitable slaughter weight. They had "a thick layer of lard and kidney fat which is in great demand in this very cold climate."

To some extent, there is no such thing as a "native" breed. Five hundred years ago there were no Min pigs in northeastern China and no pigs whatsoever in North America until Spanish explorers brought them over. In the early 20th century the U.S. Department of Agriculture spent years negotiating with Denmark to get Large White (Landrace) pigs to improve U.S. pig breeds; the Americans finally got some Danish pigs in the 1930s. The lean-type hogs that resulted began to dominate the U.S. swine population in the 1950s and transformed the U.S. pork industry. Many descendents of those pigs now populate Chinese pig farms.

Problems in China have arisen because the pork industry was largely neglected and mostly (not entirely) cut off from breeding improvements in the rest of the world for decades. When China re-opened in the 1980s. Instead of developing genetics gradually and incrementally, its pork industry made a "great leap" by importing of genetics that had been developed overseas during its decades of isolation. The imported pig breeds boosted pork consumption with surprisingly little increase in grain consumption, but diseases have multiplied since the "foreign" breeds lack resistance and do not tolerate the harsh conditions, variable feed quality and poor management on Chinese farms.

There is justification for preserving "native" breeds so their genes will be available for breeding needs in the future. Chinese scientists have been aware of this for a long time but native breeds nearly disappeared until "the market" made conservation possible. Conservation is easier to accomplish if it's profitable. Cross-subsidization of conservation with profits from "foreign" breeds and the nascent revival of niche markets for native pork improve the prospects for conserving "native" Chinese breeds.
Posted by dimsums at 6:44 PM

These would be great for american hobby farms! I've been trying to learn more about this breed for a number of years now...even contacted the main college that imported them in the 1980's here in the united states but they were of little help since the program has long since closed and the herd disposed of. Who do i contact about importing them? I'm hoping to have some in the next decade to cross with tamworth and mangalitza pigs.

The article speaks about conserving Min Pig, one of China's native swine breeds.It is mentioned that this breed has more resistance to disease than other types.Also pork from native breeds is preferred because of the taste and ease to chew and digest.The climatic conditions and the feed quality are also important.Swine feeds are sold as bulk or bagged custom mixes."