According to Farmers' Daily, early-maturing corn varieties Demeiya Nos. 1, 2, and 3 imported from Germany have become very popular in recent years among state farms in China's northern latitudes along the northern border. The German company KWS has a joint venture with Kenfeng, a Chinese seed company that also has its roots in the state farm system of Heilongjiang, and Kenfeng markets the seed. According to Farmers Daily, Demeiya is high-yielding, good quality, resistant to lodging, can be densely planted and dries quickly. The seed was introduced in China during 2007 and quickly gained popularity [perhaps helped along by Kenfeng's links to the state farm system?] Farmers Daily reported that Demeiya accounted for 65% of corn seed used in the state farm area of northern Heilongjiang this year and is expected to reach 80% next year.

Farmers Daily explained that other high-yielding corn varieties get low yields in northern Heilongjiang due to cold temperatures. The KWS varieties mature early, in 108-115 days or so. Demeiya no. 1 has a thin stalk and can be planted densely, about 7000 plants per mu.  It also dries fast, an important feature. Grain traders liked buying Demeiya since the corn could be immediately threshed and loaded. The yield was said to exceed 10,000 kg/ha. In state farm demonstration fields the yield reached as high as 13,500 kg. It has spread to Heihe, Jiamusi, Yichun, Hegang and most parts of northern Heilongjiang. Previously, only soybeans could be grown during the short season in this region, but the new variety is allowing farms to make more money growing corn. 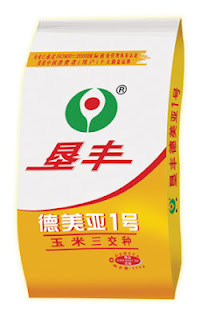 One post on an electronic bulletin board last October asked, "Are people planting Demaiya No. 3 this year? How is the output and cost of seed?"

One response was, "The price is high and production is OK. It produces hard, quality corn that sells well." A second response concurred that production using Demeiya No. 3 was extremely good in Baoquanling district and cited some high yields, adding "of course the price of the seed is relatively high."

Of course, any product--especially seed--selling at a high price draws knock-offs. In March this year, authorities discovered 30,000 kg of fake Demeiya No. 1 seed in Heilongjiang's Suibin County. County officials gathered samples from the Kenfeng Company for testing at the local agriculture bureau's testing center where they found bags labeled as Demeiya No. 1 contained a different kind of seed. Local police confiscated the seed and are conducting an investigation.

The new seed illustrates the fantastic growth in China but also exposes the hollow core of its development model. Beneath all the hype over China's amazing economic growth is the lack of real innovation. Nearly all the basic technology is imported--the seeds, animal breeds and the designs and fundamental components of high-speed trains and automobiles. Seed companies that give the illusion of being "technology" companies or "hi-tech" are little more than glorified salesmen, making (and spending) most of their money by reselling imported seeds, jockeying to get control of seeds from some agricultural institute and buying up competitors. Seed companies put their brand name on the bag but don't always know what's inside the bag.

An incisive analysis of China's seed market by Tong Pingya in January 2011's China Seed News observed that seed companies market seed based on which company gives them the largest rebates, not quality of seed. He also estimates that over 40 companies are illegally selling the leading corn variety, Zhengdan 958. Two of China's biggest seed companies, Denghai and Dunhuang, attributed booming profits during 2010 to their sales of Xianyu 335, a wildly popular corn seed variety produced by a multinational company.

The same issue of China Seed News reports on China National Seed Group, the only state-owned enterprise in the crowded seed industry and apparently the government's choice to be the flagship enterprise of the industry. The article reports that the company--once the largest seed company in China--has had its market share chipped away for foreign and domestic seed companies. One of it's great achievements reported for 2010 was that it became the fifth company licensed to produce and sell Zhengdan 958, but this corn variety is losing share to other seeds like Xianyu 335. China National Seed is in a cooperative venture with another multinational to develop a corn variety in southwestern China.

On a related note, see this Wall Street Journal video on China's imports of dairy cattle:

There's little incentive to invest in long-term research in China's get-rich-now culture.  If I were to invest in developing my own seeds, the market would be quickly undermined by knock-offs. Why spend years paying scientists to breed seeds when I can get them today from my joint venture partner?
Posted by dimsums at 10:32 PM