Save the Family Farm in China

Thirty years after the re-introduction of family-based farming in China there is a sense that small plots cultivated by individuals are not efficient enough to feed China's population. Should China turn to large-scale high-tech farming? Should Chinese companies go out to operate farms overseas?

Top rural policymaker Chen Xiwen pondered these questions in a rambling but candid speech given to a rural development summit at Tsinghua University last month. His discussion addressed the trend of companies entering farming, the rising tide of agricultural imports, and the strategy of Chinese overseas investment in farms. 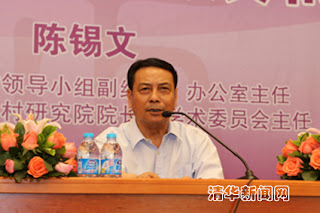 Chen observes that China imported 62 million metric tons of soybeans and grain last year, which was equal to about 10 percent of China's production. China has about 9 percent of the world's arable land and 17 percent of the world's population. Under pressure to feed such a large population with a small endowment of natural resources China needs to convert those resources into food more efficiently and to find new sources of food overseas.

Chen cites the attention-getting announcement that Wuhan Steel Group plans to begin raising pigs (dim sums post on this). Chen thinks "we should pour cold water" on the trend of companies getting into agriculture. He draws a parallel between company-operated farms and the failed collectively-managed farms that existed from the 1950s to 1970s. Both types of organizations rely on hired workers to do the actual farming which creates incentive problems. Chen cites his own experience working on a collective farm for 10 years. Everyone got the same salary no matter how hard they worked so everyone tended to slack off. Family-based farming gives individuals incentive to maximize output from their land since they are the residual claimants. Chen notes that farming has been family-based in China for thousands of years and nearly every country organizes their agriculture as family farms.

Chen says that from a technical standpoint China could operate even larger and more technically-advanced farms than in the United States. And in fact he says there are officials in Heilongjiang eager to bring in the most advanced technology and operate 30,000-mu (4,900 acre) farms. However, Chen says, the problem is that China has 600 million people in the countryside. Where would they go? What would they do? He notes that in some places village houses are being demolished to create new fields, but this is destroying the traditional village social structure.

Chen seems to endorse family-based farms but insists that individual farmers need help from companies to obtain technology and training. He also endorses farmer cooperatives as a means of providing extension-type services to farmers.

Chen's views on this are not entirely clear. He notes the overseas investment strategy has met a lot of stumbling blocks and has not made much progress. Acquiring large tracts of land in other countries is difficult since they have private ownership and restrictions on foreign control of farmland. He cites a plan to grow corn on over 2 million hectares of land in the Philippines, but this would be unrealistic since it would be such a large proportion of that country's land. He says a lot of [Chinese] people went to Africa to acquire petroleum and fish but not much was sent back to China. The commodities are sold where they can generate the most profit [which is not necessarily in China].

One of the arguments Chen makes for family farming in China is that local people have the best knowledge of how to farm in their locality's resources and environment. By extension, why should anyone expect Chinese companies to be more efficient than local people at operating farms in Latin America or Africa?

Chen concludes that these issues require a lot of strategic thinking. More food for thought...
Posted by dimsums at 8:11 PM