Wheat Scab? We Sprayed it!

Heavy rains this year created ideal conditions for disease in the wheat crop. In particular, there are concerns about wheat scab, a disease that often spreads in China's wheat growing regions during periods of wet and humid weather. The disease can affect output and bacteria produce a toxin that makes the grain inedible by humans or animals.


In April this year, the Ministry of Agriculture was so concerned about wheat scab that a special emergency campaign was launched to douse the wheat crop with chemicals to control the disease. 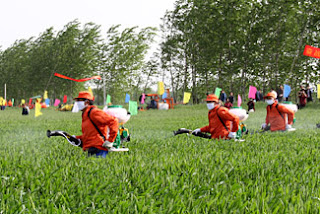 
On June 21 the Ministry of Agriculture held a press conference to allay any concerns about the wheat harvest.

The first question was a softball: "In Anhui, Jiangsu, and Henan there has been a relatively serious outbreak of wheat scab. What is MOA’s assessment of this problem's effect on summer grain output and quality?

Vice Minister Chen Mengshan responded by acknowledging that, yes, the rainy, humid weather had created conditions for wheat scab, but the disease was kept under control by the big spraying program. He said there were some impacts of disease on the wheat crop but no worse than they had anticipated. The MOA's forecast for another record summer grain crop is unchanged.

Reports from a handful of regions indicate scab is worse than usual, but seem to confirm Chen's assessment that the effects were limited to a few areas.

Today, the Ningbo (Zhejiang Province) branch of the Peoples Insurance Company announced they are paying out 1 million yuan in claims for losses due to wheat scab and lodging due to storms before harvest. The payouts were for 5500 mu out of the 1 million mu of wheat in Ningbo.

In Yancheng City a meeting was held to discuss insurance coverage of wheat scab losses in Jiangsu Province. According to the article, 3.18 million mu of Yancheng's 5.48 million mu was struck by "disaster" and the payout is expected to be 136 million yuan.

In Taizhou, also in Jiangsu, about 5% of the wheat crop is estimated to be lost to wheat scab.  In Nantong, the percentage is estimated to be 8%-12%. The usual proportion of the crop in this part of Jiangsu affected by wheat scab is 1%. The falling weight is also lower than usual this year. The price is expected to be on a downward trend due to quality issues.


According a report from Feixi County in Anhui, about a dozen counties have been affected by scab to varying degrees. A reporter saw the golden fields of wheat, but walked in an saw plants with no grain. In Wuhu County in Anhui Province, an estimated 10%-20% of the crop is affected and the falling weight is just 640 g/l. Wheat failing to meet standards can't be sold.


One farmer in Anhui said he lost his entire 260 mu of wheat to scab. He had insured the crop, paying 2.43 yuan per mu (I calculate this to be about $2.30/acre; the other 80% of the insurance premium was paid by subsidies from the central, provincial and local governments). Insurance will compensate him 270 yuan per mu, 30% of the value. 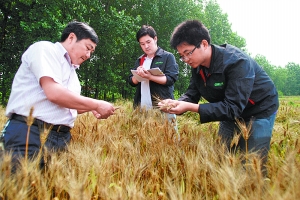 
Last month, agricultural experts in Shandong confirmed a relatively serious outbreak of wheat scab there, an unusual occurrence for the province that was attributed to the weather. In Binzhou, scab was estimated to have affected 2.3% of the wheat area. In Dezhou, the crop reportedly was not affected by scab or pests.
Posted by dimsums at 11:20 PM