China has increased its agricultural imports this year despite largely snubbing products from the United States. Calculations using China's customs statistics indicate that China imported $10.3 billion of agricultural and food products during October 2018, up from $9.3 billion in October last year, a $1.6-billion year-on-year increase. China's imports of ag products from the United States during October were $866 million less than a year earlier. The decline in imports from the U.S. will become even more prominent during November-January if China is able to continue avoiding imports of U.S. soybeans during those months--usually the peak season for U.S. soybean supplies. 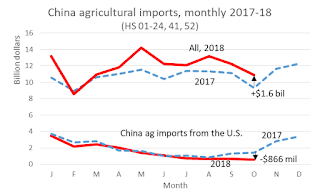 Brazil has played a dominant role in keeping China supplied with soybeans. China's October ag imports from Brazil doubled from a year ago. The $1.65-billion year-on-year boost in purchases from Brazil was also twice as much as the year-on-year drop in imports from the United States. Brazil was, by far, the largest supplier of China's imported agricultural products. China imported more from a number of other countries, but none came near to matching the increase in purchases from Brazil.

The share of China's agricultural imports obtained from the United States shrank from about one-fourth in January and February this year to just 5 percent in October. There was a noticeable drop in U.S. share in July when China's retaliatory tariffs took effect. The drop occurred in May for meats because meat tariffs were introduced in April and boosted again in July. The U.S. share of China's oilseed and meat imports was down to 2 percent in October. China's grain imports from all countries have dropped, and imports of U.S. grain were negligible in August and October.


Brazil has almost single-handedly kept China supplied with soybeans. China imported 6.9 mmt of soybeans during October, ahead of the pace a year ago. Brazil remains the predominant supplier of China's soybeans despite nearing the end of its marketing season. Brazil supplied 85 percent of China's oilseed imports during October and Oilseeds accounted for 85 percent of China's ag imports from Brazil. Yet the prices China paid for soybeans were up only slightly. Brazil's customs data shows that the average prices of soybeans exported to China have been relatively flat, at about $400 per metric ton. China's import price reported by its customs data was up slightly, to $435/mt during October. U.S. soybean export prices calculated from U.S. customs data fell about 12 percent below the average Brazilian export price. 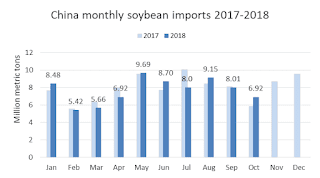 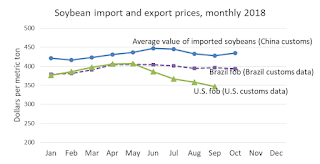 In their revision after conducting an agricultural census last year, China's statisticians discovered 43.7 million metric tons of additional grain--most of it corn. Their 2017 estimate of "grain" output (includes cereals, beans, and tubers) was increased from 617.9 mmt published earlier this year in a Statistical Abstract to 661.6 mmt published in last month's China Statistical Yearbook. Corn has clearly supplanted rice as king of Chinese agriculture after a 20-percent increase in estimated corn output--from 215.89 mmt to 259.07 mmt--that accounted for nearly all of the increase in estimated grain output. Corn output now clearly exceeds output of rice by a wide margin, and the revised total of 42.4 million hectares planted in corn exceeds the 30.7 million hectares planted in rice.


Total meat output for 2017 was revised upward by less than 1 percent, but the composition was adjusted. The statisticians revised pork output upward by 2.1 percent, but they revised beef output down by 12.6 percent. They also revised output of cow's milk downward by 14.3 percent. The revisions erased 5 million metric tons of milk and 915,000 metric tons of beef. The number of slaughtered hogs in 2017 was revised up from 688.6 million to 702 million, an increase of 13 million (+2 percent). The inventory of cattle was revised downward by 13.5 million, a reduction of 13 percent. Sheep meat and egg production were revised upward by less than 1 percent. It's probably no coincidence that there were increases in pork and other meat (mainly poultry) which are the main consumers of corn. The number of cattle--raised for beef or milk--which eat mainly grass was less than previously estimated.


China's National Bureau of Statistics released the new data in its China Statistical Yearbook with a footnote explaining that numbers were revised based on results of last year's decennial agricultural census. No further explanation was provided. Below new statistics are compared with 2016 numbers published in last year's yearbook and a few 2017 numbers published in a Statistical Abstract earlier this year to discern what was changed.

Changes in the crop output statistics are based mainly on revised estimates of area planted. The chart below shows that a 7.4-million-hectare increase in corn area was by far the largest revision of 2016 crop statistics. Wheat and rice area were bumped up slightly, but area was revised downward for every other crop. Vegetables (-2.35 mil ha), fruit orchards (-1.85 mil ha), and tubers (-1.7 mil ha) were cut by the most. It seems odd that grain crops were the only ones that had upward revisions. 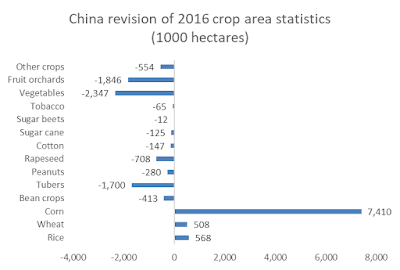 The 7.4-million-ha. revision of corn area represents a 20.2-percent increase from the 2016 statistic previously reported (scroll down for detailed tables). Rice and wheat area were increased by about 2 percent each. Crops with the largest downward revisions are those that tend to be exaggerated by local officials creating subsidized "production bases" of vegetables (-10.5%) to support "market basket" supplies for cities, fruit orchards (-14.2%) planted as an economic development strategy in poor hilly counties, and tubers (-19%) newly declared  as a major food crop several years ago and also a beneficiary of subsidies for poor counties.

Most of the new grain production discovered by the statisticians was in provinces north of the Yangzi River (see table below). Heilongjiang Province's grain production figure for 2017 was revised upward 13.9 mmt, an increase of 23.1 percent and about a third of the national revision in grain output. Comparison with 2016 figures shows Heilongjiang's new rice output is 25 percent higher than in 2016, its corn output is up 18 percent and its bean output is up 38 percent. Upward revisions of 4-to-6 mmt were made for other northeastern provinces Inner Mongolia and Jilin, and for provinces in the Huang-Huai region of northern China: Shandong, Henan, and Anhui. Major corn and wheat-producing provinces appear to have had upward revisions in production of both crops. Shandong's 2017 corn output was 29 percent larger than its 2016 estimate and its wheat production was up 6 percent. Anhui's rice, wheat and corn output were all larger in 2017 than in 2016. The increase in corn production occurred all across the country. Sichuan's corn output was increased but its rice and wheat output were cut. The two top rice-growing provinces, Hunan and Jiangxi, had smaller upward revisions of grain output of less than 1 mmt each. Grain production was revised downward in southern coastal regions, but the magnitude was much less than the upward revisions in the northern provinces. Zhejiang and Fujian provinces had their grain output slashed by about 25 percent due to lower rice output.

Comparing revised 2017 output with 2016 numbers, there is about 40 percent more pork production in Shandong and Yunnan Provinces and about 20 percent less pork in Sichuan and Chongqing. Dairy output was slashed about 25 percent in Inner Mongolia, 14 percent in Hebei and Heilongjiang, and nearly 40 percent in Henan Province.

The census is an inventory of land use, animals, people, and rural infrastructure taken every 10 years since 1997. The Statistics Bureau conducts annual surveys in a sample of villages and fields to ascertain crop yields and they ask a sample of farmers what they planted to discern how plantings changed in a particular year (they also receive reports from State farms that account for about 10% of output). A quarterly sample survey tries to track animal inventories and slaughter of livestock. Last year's census was the first time since 2007 statisticians had gone out to get a complete count of people, farms, land, and animals. The census collected numbers as of December 2016.

A troubling aspect of the census is a footnote in the first census communique released last December explaining that the census's estimate of cultivated land area comes from the Ministry of Land Resources which is based on an entirely different land survey and shows a nearly constant area of cropland from year to year as newly developed land somehow offsets losses from China's construction boom. The 2016 cultivated area estimate of 135 million hectares is higher than the 123 million hectares reported a decade ago in the 2006 census. (Dimsums previously explained the incongruity of land statistics.) The Statistics Bureau apparently had to massage its estimates of crop production to make them consistent with the total crop area statistic reported by the Land Ministry by allocating the 135-mil-ha among particular crops plus double-cropping and minus fallowed land based on their census findings (maybe). In other words, it seems likely that these numbers were manipulated to fit a statistic produced by the Land Ministry and are not actual counts of area planted in crops. We'll wait and see whether the Bureau publishes crop area findings in volumes on the actual census results or keeps them hidden.

The Bureau made historical revisions back to the previous census year of 2006. The faster growth in the revised corn output numbers appears to parallel rising procurement of corn (reported by the State Administration of Grain) that nearly doubled during 2011-15. (The decline in procurement in 2016 and 2017 reflects the suspension of temporary reserve procurement program in 2016.)
If these numbers are true, it suggests China has ploughed up its grasslands, hillsides and wetlands in a major way to produce huge volumes of corn. This was apparently not only an environmental disaster, but also wasteful--as most of the increased corn production went into government storage bins (if the State Administration of Grain's procurement statistics are true). Chinese officials seem to believe this, as they are in the third year of a major campaign to reverse the excessive planting of corn.

We will never know how much China actually produces or consumes. These new numbers are still guesswork. Imports and exports are observable and can be verified against the data reported by their trading partners. Prices can also be observed. Rising imports or increases in prices are indicators of short supplies, but without accurate data it is hard to predict when markets will become tight.

No one thought China could produce this much corn. Ten years ago USDA's baseline projected that China would plant 30 million hectares of land in corn and produce 178 mmt in 2017/18. Now China says they somehow found 42 million hectares to plant in corn and produced 259 mmt last year--a difference of 12 million hectares and 81 mmt. Does it matter what mythical number China puts out, though? Ten years ago, USDA projected that China would import 3.5 mmt of corn in 2017/18--and China actually imported...3.467 mmt of corn. Not bad, but we'll discuss China's effect on world markets for DDGS, sorghum, and barley another time.


Posted by dimsums at 8:44 PM 3 comments: Links to this post