Customs data show that China's imports of U.S. soybeans during February 2019 bounced back to 907,754 metric tons. That's up from 135,772 metric tons in January and the largest volume since trade tensions began last April, but still far behind the 3,344,521 metric tons imported in February 2018. 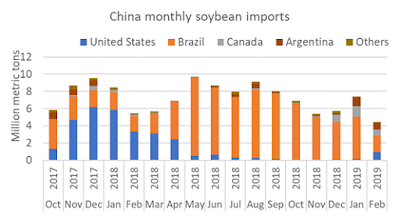 Brazil was again the leading source of China's soybean imports in February 2019. China imported 1,986,344 metric tons from Brazil, less than half the 4.9 mmt imported from Brazil in January and the smallest volume from that country since February last year. February is normally the seasonal low for China's imports of Brazilian soybeans.

Posted by dimsums at 8:24 PM No comments:

The first round of China's pork reserve purchases have been scaled back from 100,000 metric tons to 10,000 metric tons, according to a China Feed Industry Information Network report. Stronger hog prices last week may have reduced the urgency of removing pork from the market.

According to the report, the average hog price in China increased 3.85 percent last week. The average was 12.42 yuan/kg, up from 11.96 yuan/kg the previous week. However, the average price of pork fell 0.3 percent and the ex-factory price of a swine carcass fell 1.05 percent.

The reason for scaling back purchases is not identified, but rising prices may have prompted the decision. The analysis said the volume of swine being produced is shrinking slightly, but consumers are reducing purchases of pork and the overall market supply is adequate. The analysis said farmers have become reluctant to sell hogs and prices are rising. The article said that price has become detached from basic supply and demand. Prices are expected to rise gradually, but regional imbalances remain prominent. Price declines are possible in some regions.

The feed industry report also raised concern that the conclusion of U.S.-China trade consultations could result in an agreement to import U.S. corn. The report warned that an influx of U.S. corn would put downward pressure on Chinese corn prices.
Posted by dimsums at 4:17 PM No comments:

Chinese farmers are looking for more clarity about promises of higher subsidies for corn and soybeans so they can decide whether it's worth renting land for upcoming spring planting.

Chinese officials hoping to carry out a policy directive to expand soybean production this year recently announced that this year's subsidy payment for soybeans would exceed the corn subsidy by 200 yuan per mu this year, but they did not announce the amount of the subsidy for either crop. In Heilongjiang Province--the largest producing region for both crops--last year's payments were 320 yuan per mu (about $280 per acre) for soybeans but the corn subsidy was slashed to 25 yuan per mu ($22 per acre). There are also "land rotation" payments for farmers who switch land from corn to soybeans or other crops. Officials in Heilongjiang also recently announced they would buy up 200,000 metric tons of soybeans for provincial reserves to bolster soybean farmers' confidence.

Officials typically don't announce exact amounts for these subsidies until the fall months when the crop is harvested.

Factoring subsidy payments into Chinese land rental contracts is common practice. Official documents on farm subsidies frequently insist that farmers must have a written contract specifying which party is entitled to subsidies to head off disputes over the payments. An article on a farm real estate web site last year explained that investors and farmers renting rural land must be aware of crop subsidies, poverty alleviation subsidies and subsidized loans attached to the land and gave examples of how to incorporate these payments in land rental contracts. In past years, the "temporary reserve" program that supported corn prices also inflated land rents in northeastern corn-growing regions. Rents declined sharply in 2016 when officials removed the "temporary reserve" for corn, allowing the corn price to fall by about 30 percent.

Posted by dimsums at 6:02 AM No comments:

Chinese authorities are planning to buy as much as 200,000 metric tons of pork for government reserves to bolster the confidence of pig farmers shaken by the African swine fever epidemic.

The 12-percent shrinkage of China's swine inventory last year reported by the Ministry of Agriculture and Rural Affairs was the largest decline ever recorded, according to a China Agricultural university professor who spoke at a press conference on ASF put on by the Ministry last Friday. The professor attributed the shrinking herd to farmers' worries about African swine fever that discouraged them from replenishing herds; cash flow shortfalls; accelerated withdrawal of small-scale farms due to industry upgrading; and consumers shifting purchases away from pork to other foods. The professor assured listeners that officials are pondering policy measures to help farmers deal with the difficulties and urged farmers to exercise good prevention and control measures and add to their herds to take advantage of expected high prices later in the year.

Futures Daily reports that purchases of pork for government reserves will begin March 8. The purchases are expected to be carried out in two 100,000-ton tranches purchased during March and late April and early May.

Zhue.com.cn says the first 100,000-ton purchase this month is confirmed but there are varying rumors about the total amount of reserve purchases. The history of reserve purchases they report indicates this could be the largest purchase of pork for reserves since 290,000 tons were purchased over 11 months during 2009-10. Only 10,000 tons were purchased in 2017 and 2018 and none was purchased in 2015-16.
Market analysts told Futures Daily that pork reserve purchases are generally not large enough to have much effect on price. The purchases are made by contracting with slaughterhouses that receive subsidies to buy and store frozen pork. The main impact is to bolster the confidence of farmers, which encourages them to hold back animals in hope of higher prices. One analyst said reserve purchase contracts are often not fulfilled when prices do go up because slaughterhouses find purchases unattractive, even with a subsidy.

Many investors are convinced hog prices are about to rebound in the second quarter of 2019. Prices could rise from the current 14-15 yuan/kg to over 21 yuan/kg late in the year.

Zhue.com.cn reports that supplies of both hogs and piglets are already tight and prices are rising in many provinces.

During the "blue ear disease" epidemic in 2007, officials gave out 100-yuan-per-head subsidies per productive sow to encourage farmers to keep sows during downturns in the market. In 2009, a "hog price alert" mechanism was launched as a market stabilization tool that would monitor the hog-corn price ratio and a series of other indicators that would trigger purchases and sales of frozen pork reserves. Both of these hog market stabilization measures seem to have disappeared and are not being publicly discussed.
Posted by dimsums at 9:28 PM 1 comment:

Top Chinese grain-producing provinces hope to bolster weak domestic corn and soybean markets by purchasing commodities for provincial reserves in March and April. The move signals weak market conditions in China for soybeans and corn despite having cut off nearly all imports of both commodities from the United States since the trade war began last year.

Chinese news media say Heilongjiang provincial authorities issued a "Notice passing down purchase prices for the first 2019 provincial-level reserve purchases of corn and soybeans" that calls for additional purchases of the two commodities that will be added to provincial reserves. The document--issued February 26 by Heilongjiang Province's Grain Bureau, Finance Department, and the provincial branch of the Agricultural Development Bank of China--sets prices of 1600 and 1620 yuan per metric ton for reserve purchases of corn in two zones of the province and soybean purchase prices ranging from 3420 yuan/mt to 3460 yuan/mt across three provincial zones. Purchases are expected to continue through April 30, the customary end of the procurement season. (The document does not appear to be publicly available.)

Jilin Province also launched provincial-level purchases of corn in December 2018, according to an earlier report from Jilin's grain and commodity reserve bureau.  Jilin had purchased 78,500 metric tons by December 25, said to be 37 percent of planned purchase volume. These purchases were described as reversing pessimism about the corn market by stemming a decline in prices.

Heilongjiang Province also plans to double the volume of soybeans purchased for provincial reserves from 100,000 metric tons to 200,000 metric tons, according to another news media report about a meeting on provincial grain purchase work held February 22. According to the report, this year's purchases of soybeans have been markedly slower than a year ago as processors are getting low profits and traders are getting thin margins. Corn purchases in Heilongjiang are slightly slower than last year, while rice purchases are going smoothly. The report said that provincial-level reserve purchases have been launched to address the "contradiction" between supply and demand of fall-harvested grain. Provincial grain bureau officials will coordinate corn and soybean purchases by local grain companies, the report said.
Posted by dimsums at 7:40 AM No comments: