Machines for Cattle: Where's the Beef? 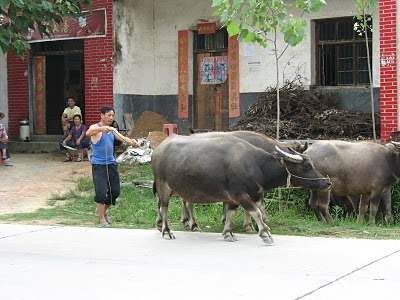 A farmer herds his cattle in Hubei Province, august 2009

Mechanization is one of the measures China is pursuing to modernize its agricultural sector. Since 2004, there has been an expanding subsidy program to encourage purchase of all kinds of agricultural machinery.

This is a profound change in the rural ecology of China. Traditionally, crops, livestock, and people existed in an interlocking cycle that supported huge numbers of people on a very limited land base. Farm work was performed by a combination of back-breaking labor by people with the help of water buffalo and cattle. In exchange for their work ploughing for a week or two and various other tasks, the cattle got to loaf around and wallow in rice paddies the rest of the year. When their useful life as draft animals was finished, they were turned into a beef dinner.

The mechanization program actually has a slogan of “machines replacing cattle (ji dai niu)” that has the objective of eliminating the use of draft cattle. Based on an online search of news articles, Hubei Province seems to be the most ambitious. In Gong’an county, since 2008 they have eliminated precisely 6,235 cattle and replaced them with 3,558 pieces of equipment bought with subsidies. The county has 62 village and 3entire townships where draft cattle have been completely eliminated.

In Jingzhou, party members and state farm cadres have been instructed to set a good example by eliminating their draft cattle. As of October, the district had eliminated 5762 cattle but that was just 28% of their goal. In Jingzhou they're on the lookout for people who kill their animal and then buy a new one.

Gansu officials boast that their “machines replacing cattle” plan has resulted in declining numbers of cattle and “farmers’ dream of cultivating land without cattle is coming true.”

The urgency of getting rid of cattle is motivated by public health concerns. The “machines replacing cattle” program is led by the “schistosomiasis control” leadership group in Hubei Province. Schistosomiasis is a potentially deadly parasitic disease spread by freshwater snails and affects as many as 1 million people in China. Schistosomiasis, also known as "snail fever", was widespread in the 1960s when sanitation was particularly poor. There has been a resurgence of the disease in recent years.

According to a 2004 Xinhua article, “In the coming years, China will work to improve people's awareness and prevention of schistosomiasis infection, change traditional farming method and lifestyle, screen rural residents and animals infected with the disease and offer appropriate medical treatment.” In September, Vice Premier Li Keqiang announced a renewed campaign to fight schistosomiasis following the summer's flooding.

The disease is most common in the provinces along the Yangtze River, centered around Hubei. In Gong’an County, infected cattle are being slaughtered and farmers can be compensated 1200 yuan per animal.

The mechanization program potentially has important implications. Obviously, China’s agriculture is becoming more petroleum-dependent. Instead of relying on local sources for energy (food) for people and draft animals, petroleum must be brought in from overseas.

The “machines replacing cattle” program could also have implications for China’s meat industry.

China’s beef has traditionally come predominantly from cattle used for draft purposes. China doesn’t have enough pasture to raise heifers and calves profitably. Land is too scarce to just grow grass. Moreover, the cycle for raising cattle to market weight is 2-3 years, too long for Chinese farmers to wait for a return on their investment. You can earn a lot of money working off-farm in the time it takes to raise a calf to market weight.

An insightful 2008 report from the China Livestock Industry Association calls attention to a widespread abandonment of beef production by Chinese farmers and declining cattle inventories in many places. Many slaughter facilities are closed or running far below capacity. According to the report, farmers are only willing to raise cattle if they are dual-purpose—for draft and meat. Many farmers are unwilling to raise cattle just for beef.

If draft cattle are replaced with machinery, they are unlikely to be replaced by cattle raised strictly for beef. This means short supplies of beef and high prices for beef. This means either China will import beef or expensive beef will induce Chinese consumers to substitute other meats and protein sources. This may already be happening. Chinese beef prices have been quite high since 2007 and beef consumption is largely limited to niche-type restaurants—McDonalds, hot pot, Muslim restaurants, Brazilian barbeque, and stead houses—in most of China.
Posted by dimsums at 7:50 PM

No one farms in 1st world Nations...