Watch Out for the 12th Five-Year Plan 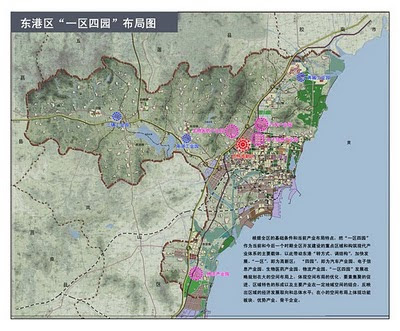 In some ways, China is one of the most market-driven economies ever seen. Yet the Communist Party retains the concept of the "five-year" plan that came out of the Stalin-era Soviet Union and was widely adopted in mid-20th century by developing countries. Almost everyone else has abandoned five-year plans but China is about to roll out its 12th five-year plan.

In the 12th five-year plan China plans to upgrade its industry structure to include more high-tech, large-scale industry in place of the low-end small-scale manufacturers that have driven the economy over the past few decades. Official strategies for accomplishing this include developing comprehensive regional plans that will concentrate industry clusters in "advantaged" regions that take advantage of local resource availabilities and strong companies. Investment comes from foreign and domestic investors as well as publicly-funded projects.

Consider the new plan being implemented by Rizhao, a medium-sized port city in southern Shandong Province that you have probably never heard of (its name means "sunshine"). The city has a plan for its harbor district called "One District, Four Zones" that carves up the district into four industry zones: high-tech industry, automotive industry, photoelectric equipment, and logistics. The district map has been carved up into regions for each zone and sprawling industrial parks, roads, factories, housing complexes, and warehouses are being constructed at a furious pace.

This is the lowest level of a hierarchy of plans. The province has a "blue economy" plan for the Shandong Peninsula, and there is a "Southern Shandong Coastal Industry Plan." Local officials recently gave speeches urging everyone to grasp the importance of the plan and they have set targets for construction and production value from each zone to be achieved during the 12th five-year plan.

The magic words for the new plan are "high-tech," "innovation," and "ecological." Each zone has several companies to serve as the "dragon head" to pull along development of an industry cluster. The high-tech zone includes automobile manufacturing based around the provincial automobile manufacturing company, a "micro car" project, and car parts industries. Another industry focus is manufacture of photoelectric parts like LED, LCD, LVD, and solar-powered photovoltaic cells, intelligent systems, and software. A third industry cluster is based on several pharmaceutical companies and biological industries, including ocean-related products. There will be a provincial-level technology innovation demonstration center. 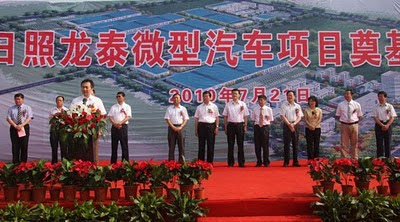 There is also a network of logistics zones devoted to various industries. This includes port services, steel products logistics (associated with East China Steel Co.), and a city outskirts agricultural logistics zone that features transportation, storage and processing of apples and peanuts.

There is also a big furniture mall in the works.

The plan has already been in action since 2009. Eight factories, an apartment building and dining hall have been completed and a big area has been developed. There is a target for the district to produce value of 100 billion yuan during the five-year period.

Rizhao's plan is representative of how the Chinese economy operates--massive construction of production capacity, all carefully planned by officials. Build it now and find a market for the products later. And there are probably dozens if not hundreds of other cities hatching similar plans. Soon there will be hundreds of new "high-tech innovation parks" with factories producing medicine, auto parts, and solar panels. How will all these factories sell their products? Most of them will operate at 20%-to-30% of capacity. Exporting to the United States is always a good backup plan...

Some of the rhetoric being thrown around in the trade debate argues that China doesn't compete with the United States because it exports things that the United States doesn't produce any more. Yes, China produces things like shoes, socks, toys, and t-shirts, but it also is making more pills, pistons, and pear juice that directly compete with U.S. products. Free trade is great, but I'm not sure this is what Adam Smith had in mind.
Posted by dimsums at 7:52 PM