An early November article from the Pingyin County price bureau in Shandong Province reports that prices for local apples have been rising quickly since about October 20. Like a number of other commodities, a weather-related supply disruption in combination with the current inflationary climate have lured traders and speculators and prices are spiraling upward.

In Hongyuanchi Town, the October retail price for “Fuji” apples is 4.4 yuan/kg, up 22.2% from September and up 37.5% year-on-year. The report offers five reasons for climbing prices.

The first reason is a drop in production in the northwest. There was a late spring and hail in apple-producing areas of Gansu and Shaanxi earlier this year. This affected apple blossoms and reduced production. The report says the amount of apples coming into the area from other regions has dropped a lot.

Second, the purchase price of apples was up to 0.4 yuan this year and costs of transportation, storage and other services have risen. Third, there was a typhoon and heavy rain in Hainan and elsehwere, which disrupted transportation of apples.

The fourth and fifth reasons are related. There has been panic-buying of apples elsewhere in China and some people are hoarding the fruit. Most of the apples from this year's harvest have been sold and merchants holding apples in cold storage will only sell for a premium price.

A November 19 article from the Gansu Daily compares the rising apple price situation to that of garlic. This year many apple traders came to villages in Gansu and made agreements with farmers to buy apples in advance while the fruit was still on the trees. Merchants paid farmers 500 yuan in advance to buy a farmer's entire harvest for 2.8 yuan per 500g. While the price went up later, farmers were satisfied because the price was higher than the previous year.

Local farmers say virtually all apples were sold shortly after harvest. They are now in the hands of traders. The traders' strategy is to hold on to the apples until spring festival when they hope to sell them for an even higher price.

Why the panic? In the area of Gansu visited by the reporter this year's harvest was down 50 percent. Two reasons are given for the fall in production. One trader says it's a natural cycle: a big apple year tends to be followed by a small one. A second reason is the late spring and hail that affected blossoms.

The reporter saw the effects of late frost in poor quality apples for sale in the local market. They are scarred, discolored and bruised. One farmer selling her apples at a low price of 1.5 yuan per jin said they had to sell 2000 jin of bad quality apples at 0.3-.4 yuan per jin to an apple sauce factory. They had to cut out the rotten parts with a knife.

Meanwhile, in Yantai--a big apple-producing area in Shandong--prices of apple tree saplings are soaring as farmers expand in response to the soaring apple prices. Prices will probably be depressed again in a few years when weather is normal and all these new trees start bearing fruit. 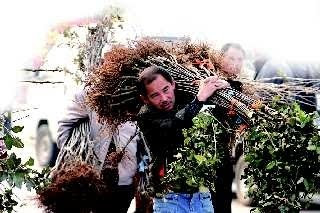 A farmer buys some new apple trees
Posted by dimsums at 7:59 AM