Vice Minister of Agriculture, Chen Xiaohua, reported at a national meeting that China now has 310,000 farmer cooperatives with 26 million members, about 10 percent of the rural population. According to an agriculture ministry official, farmer cooperatives are intended to overcome the shortcoming of China's household responsibility system--small, scattered farmers need to enter a big agricultural market.

A reporter for the 21st Century Economic Herald found that many of the cooperatives were agricultural companies that had converted themselves into cooperatives to take advantage of favorable policies.

In Anhui Province, the reporter visited the Sanhe Village Tea cooperative that formerly had been a small tea company. In fact, it still had the former company's sign hanging in the courtyard. The cooperative was set up in 2008 and has 200 members and encompasses 200 mu of tea bushes. 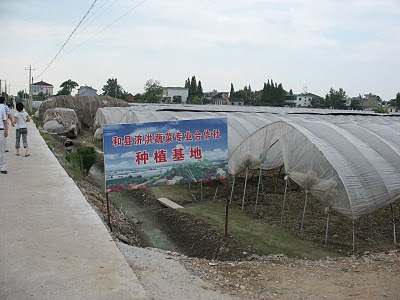 A vegetable cooperative in He County, Anhui Province. The cooperative was formed by a company that supplies vegetables to supermarkets in Shanghai.

Some members were unhappy that the funds were not evenly distributed among members. As in many cooperatives, four people--the owners of the former company--own most or all of the stock. Some of the members asked, "Is this a cooperative or a corporation?"

In Liaocheng City of Shandong Province, many of the cooperatives have been set up by individuals who want to farm on a larger scale but lack cash for working captial. They set up cooperatives with investments of 200 yuan from members. Reportedly, the shares are now worth 15,000 yuan due to the accumulation of profits.

Why would a company become a cooperative? According to one researcher consulted by the reporter, some township and village enterprises who are having trouble getting financing can get a 200,000 yuan subsidy from the local government by setting up a cooperative. Cooperatives are also exempt from the taxes companies have to pay.

However, the article says that farmer cooperatives are facing severe funding problems. Their working capital needs are much larger than those of individual farmers but they generally cannot get loans from banks or credit cooperatives. Their main source of capital is informal finance or infusions of cash by members.

According to the article, loans are now much easier for individual farmers to get. Postal saving offices and banks are giving out "micro loans" of 100,000 yuan or less to farmers. However, the article warns that many cooperatives are on the brink of collapse due to the financing problem.
Posted by dimsums at 3:18 PM