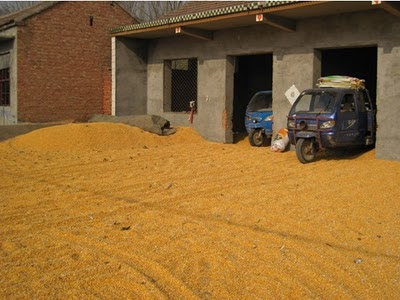 This week Sinograin Net posted a report on a survey team's visit to Anyang in Henan Province, a major wheat- and corn-producing area in the northern part of the province. The team's interviews with grain purchasers reveal that the recent measures taken by the Chinese government have had a minor effect on cooling off corn prices on the demand side. However, expectations of higher future prices and less dependence on income from grain are motivating farmers to hold on to their corn. Officials are blaming speculation and trying to root out "speculators" from futures markets, etc., but the lack of corn in the market--despite a good harvest--is due to speculation by millions of farmers. And the expectation of ever-rising prices has been built in by government policies.

The Sinograin team learned that this year's weather in Anyang was more or less normal, and both wheat and corn production were up from last year. The quality of the corn crop was better this year too. There was little rain after the corn harvest, so farmers had plenty of time to thresh and dry their corn. Moisture is down and less corn is being lost to mold this year. The team also noticed that ears were better-filled with kernels this year.

Mr. Dong, operator of a grain purchase station, told the team that the station’s current purchase price for corn with 15% or less moisture is .96 yuan/jin (1920 yuan/mt; $282/mt). [This works out to about $7.30/bushel; by comparison U.S. cash corn prices in the North Central region are in the range of $4.97-$5.10/bushel this week]. The team learned that other stations were paying similar prices.

Mr. Dong said the corn price was down slightly, about .01-.02 yuan/jin from the last period. This reflects a decrease in purchase prices by starch processors and feed mills in neighboring Shandong Province. Traders come to Anyang to buy corn on behalf of these companies, so their actions drive demand for corn. Recent policy changes, including specifically a tightening of credit that reduced working capital, led to a drop in corn purchases by the big Shandong companies.

Further interviews revealed that farmers are holding their corn off the market. A farmer named Li said he was selling some corn to generate cash, but many in his village still were holding a lot of corn. Farmers actually reduced their volume of sales in response to the recent price drop because they anticipate a return to higher prices later, maybe to over 1 yuan/jin ($7.60/bu or so).

The role of grain in the rural household economy has been fundamentally changed. Farmers no longer rely on grain sales for their income since off-farm wages and work opportunities have increased a lot in recent years. Their improved cash flow situation lets them hold grain off the market if they want; they don't need to sell their grain immediately to generate cash. 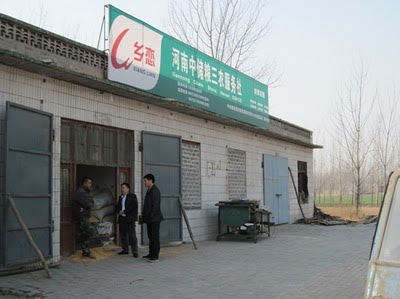 Interviews with wheat purchasers in Anyang show that the government's policy of raising minimum prices year after year has helped cement in place expectations of rising prices. The government has already announced a minimum price for wheat for next summer that is about 6-percent higher than this year's. Wheat purchasers say that expectations of higher wheat prices are locked in at all levels--farmers, traders, users--because the higher price for next year has already been announced.

A corn trader trying to buy for Shandong customers said that, despite the recent dip in prices, the outlook for corn prices is for a rising trend. He said that means the price dip presents a good buying opportunity.
Posted by dimsums at 8:37 AM