Recently, a "morality education forum" was held in Shijiazhuang, Hebei Province, where a farmer repented from his devious ways and pledged never to harm people by using pesticide and feed additives when he's not supposed to.

The article, which appeared on Chinese news sites and electronic bulletin boards, was entitled "A Farmer's Confession." Bespectacled 36-year-old farmer Xu Qingyuan, from a village in Liaoning Province, is described as wearing plain clothes and having the simple, honest manner of a farmer. His confession was said to "shock" the audience. 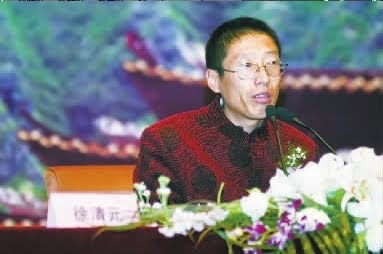 Mr. Xu confessed to dousing his cabbage with at least one spraying each week of toxic pesticides. He explains that the traditional way of planting cabbage is to plant it in late summer and harvest it late in the fall. Because of the cool temperatures, pesticides are normally not needed in this traditional mode. However, people now want to be able to consume cabbage year-round. Mr. Xu grew off-season cabbage, planting it in the spring and harvesting during the hot summer months. During this time, insects and diseases are plentiful, so Mr. Xu had to spray two kinds of pesticides, usually at least one application per week.

Mr. Xu said the pesticide label informed him that the chemicals are highly toxic and should only be applied while wearing gloves and a mask. In fact, his wife was poisoned by the pesticides, but it was discovered soon enough that she recovered.

The pesticide label also instructs users that the pesticides should not be applied within a month of harvest. But Mr. Xu says pests are at their peak in the summer months as the off-season cabbage reaches maturity. If he doesn't spray his cabbage will end up with holes in the leaves or rotten, so he ignores the one-month restriction on spraying. He says traders come and buy 10,000 jin from him at 0.10 yuan per jin--a total of 1000 yuan for all his cabbage. If he failed to spray, he wouldn't make anything at all.

Mr. Xu began raising pigs in 2007. He says it used to take more than a year to raise pigs to market weight. Now they can do it in four months by feeding them a formula consisting of mostly corn and wheat bran. The feed also includes veterinary drug additives which the label says should not be given to pigs within 7 days of slaughter.

Mr. Xu also flouted the 7-day rule on feed additives. He said the merchant came to buy pigs when the price was high. If he waited seven days, the price might go down and he would not make much money. Mr. Xu thinks few farmers obey the 7-day rule. He earned 7000 yuan selling pigs, but had to spend most of it on his sick mother.

The farmer then goes on to tell a story about chickens on a farm in a neighboring village that suddenly start flapping their wings, fall on the ground and die "as if they 're committing suicide." The malady is attributed to excessive nutrients. He mentions seeing a pile of empty medicine boxes and bags outside the gate of a farm. The chicken farmer said he spent 10,000 yuan on the medications.

Xu then had what sounds like a religious experience without God. In 2008, he heard about an old professor teaching traditional culture and he bought his book and CD to study “San Zi Gui” [an ancient book for teaching Confucian morality to children—there are lots of web sites and videos online based on this work]. After concentrated study, he understood what morality (dao de) is. Mr Xu goes on, “Now I realize I am a farmer who plants vegetables and raises pigs and don’t know how many people I have harmed. It's really hard to eat and sleep. This has violated morals and violated natural law.”

Last year, Xu Qingyuan started participating in a citizens’ morality education forum on CCTV, using his own family’s experience to confess to the general population, cautioning and educating everyone. Xu now will not plant off-season vegetables or raise hogs again. He enthusiastically studies traditional culture and uses his own money to print traditional culture books and CDs to distribute free to farmers. And he endorses eating vegetables only when they're in season.

By making his confession to the public, Xu Qingyuan has a big psychological burden, but his compatriots can be healthy. He wishes to diligently influence more people.

The meeting in Hebei was sponsored by the Democratic League, an organization "under the leadership of the Communist Party" that sponsors education activity for "mid-level intellectuals" to promote construction of socialism with Chinese characteristics. Its web site is decorated with an old-school painting of a young Chairman Mao giving a speech.

This appears to be an attempt to resurrect traditional Chinese concepts--Confucianism and traditional farm production methods--to create a sense of morality in a population that was stripped of religious and social infrastructure (including Confucianism) in the 1960s and told "to get rich is glorious" in the 1980s. Now food safety problems like the melamine incident show the results of single-minded pursuit of material well-being and callous disregard for others. The Communist Party has seized on Confucianism--a philosophy that promotes morality, social harmony and (conveniently) obedience to governing authorities without appealing to a deity or other authority that supercedes the Communist Party.