Parts of southern China are experiencing serious drought conditions. Most of Yunnan, Guangxi, and Guizhou have been suffering from drought for 5 months. Luocheng, in northern Guangxi, has been experiencing drought since last August. The drought is also affecting Sichuan and Chongqing. The rapeseed harvest may be seriously affected, and officials are worried about spring planting. Drought is affecting wheat and rapeseed crops in Gansu (in the northwest) as well.

Over 18 million people and 11 million large livestock lack drinking water, said to be double the usual number for this season. The drought-affected area is said to include 92 million mu (6.1 million hectares). Official news reports describe the situation as "extremely serious" and "grim."

Areas in red most seriously affected by drought as of March 10. Map from China National Weather Bureau.

At the National Peoples Congress held in Beijing, Premier (and unoffical Minister of Sympathy) Wen Jiabao took time out to express his sympathy to the delegations from Guizhou and Yunnan, the hardest hit provinces. Wen said, "Guizhou’s biggest worry now is to be rescued from the drought."

The national drought control and management center held a consultation and is now organizing teams all the way down to the county, town, and village level to "...troubleshoot, begin various anti-drought measures, think of solutions, and get water to the public in drought-affected regions at any cost." 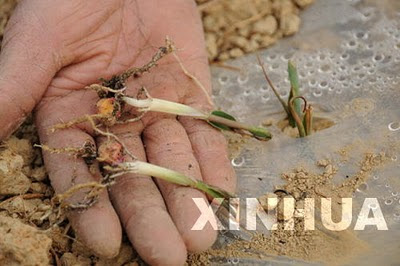 A farmer in Guangxi holds corn seedlings affected by drought 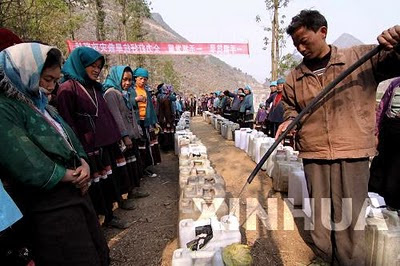 villagers from an ethnic minority in Guangxi get bottles filled with drinking water. The Communist Party never misses a chance to show how well it treats ethnic minorities.
Posted by dimsums at 10:06 PM