Since March 9, hundreds of dead pigs have been found floating in the Qiantang River that flows through Hangzhou. City residents are concerned about whether the carcasses are contaminating their drinking water, and it also raises the question of where they came from. Initially, the event was reported locally and on overseas Chinese news sites, but the official Xinhua News agency affiliates reported the story on March 19. 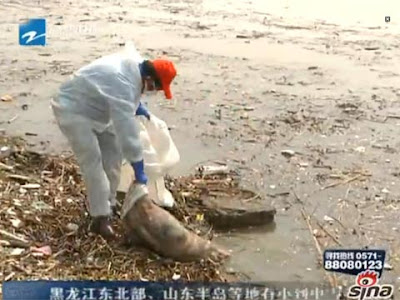 According to a local news report, on March 13, a Mr. Liang called into a Hangzhou hotline and reported: “A garbage boat on the south bank of the Qiantang River is cleaning a lot of debris out of the river. People should be careful because a lot of dead poultry and pigs have been found in the river. I heard this kind of dead pig floated down from Tonglu, but don’t know whether the drinking water is affected.”

Sanitation workers have been working furiously to pick the dead pigs and other garbage out of the river. So far, 570 pigs have been pulled out of the river. On March 14, 100 pigs were found in one day. A reporter recounted seeing the bodies in white bags covered in blood and giving off a thick stench. Most were recently-born pigs, about 50 cm long, and badly decomposed.

Local residents say that it’s not unusual to see dead pigs in the river. But usually the peak season for floating pigs is in June and July. A reporter went upstream to investigate, and people there said the dead pigs have been ommon for the last 3-to-5 years. They smell bad and local people upstream said they don’t eat catfish during the summer months because they’re worried that the catfish feed on the carcasses.

Heavy rains and consequent flooding this month explain the large numbers of pigs. Were they drowned? Were they pigs who had died of disease and were not buried deeply enough? Or were they deliberately dumped in the river?

Most of the pig carcasses did not have ear tags required by Chinese regulations. (The tags record the pig’s birth date and record of immunizations.) A provincial agricultural official said that most of the pigs were newly born and were too young to have been registered. However, carcasses of older pigs were also missing their ear tags and some appear to have had their ears cut off. According to one report, a few pigs did have their tags which enabled officials to trace them to their source.

The agricultural official said that the carcasses had been in the water for a couple of weeks and were too badly decomposed to do a post-mortem. He assures us that the dead pigs are not evidence of an epidemic, but they do reflect farmers’ failure to dispose of carcasses properly.

As far back as 2005, local officials started offering a cash reward of 500 yuan per pig to anyone who reported dead pigs being dumped in the river.
Posted by dimsums at 8:02 AM