"Dead soil" from overuse of fertilizer

Greenhouses and chemical fertilizer have helped Chinese farmers to produce huge amounts of vegetables nearly year-round. The result was higher incomes for farmers and fresh vegetables at any time of year for Chinese consumers. 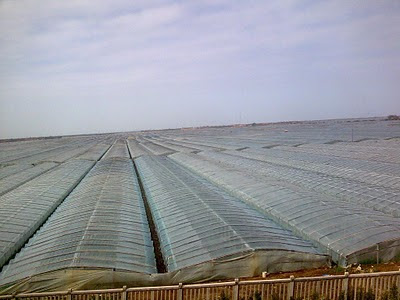 Greenhouses cover the countryside in Shouguang
A March 15 article from the overseas Chinese newspaper, World Journal, reveals the hidden costs of heavy long-term use of Nitrogen fertilizer. Reporters visited a village in Shouguang in Shandong Province, the center of greenhouse production in China. In the 1980s and early 1990s, officials introduced farmers to this new production strategy as a demonstration project. In some areas, the countryside has been turned white, covered with plastic greenhouses with few open fields. Groups come from all over the country to see how they do it.

The reporters visited 48-year-old farmer Li Yufeng. She recalls how the farmers were amazed at the fat cucumbers produced with nitrogen fertilizer in 1989. She said, cucumbers no longer grew as well after the fifth or sixth year of using chemical fertilizer. Soil fertility declined, pests and diseases worsened, and roots sometimes rotted shortly after the seedlings emerged. Now she complains that the soil is dead after many years of applying chemical fertilizer.

The director of the provincial Academy of Agricultural Science soil fertility institute is quoted as saying that if overuse of nitrogen fertilizer is not controlled, the "failure of greenhouses could spread to grain fields."

The fertilizer also causes pollution that may pose a serious health risk. The article references a study by the China Agricultural University that found 60% of the underground water in Shouguang was contaminated by nitrates. Doctors think nitrates in the drinking water may cause increased incidence of “blue baby” syndrome, gastric cancer, colorectal cancer, and lymphoma. 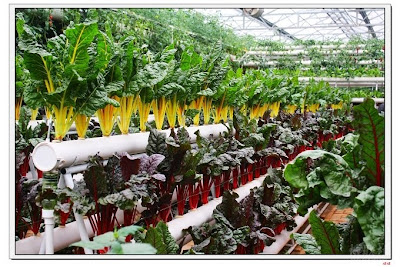 But who needs soil anyway?
Posted by dimsums at 9:48 PM