Where did the dead pigs come from? 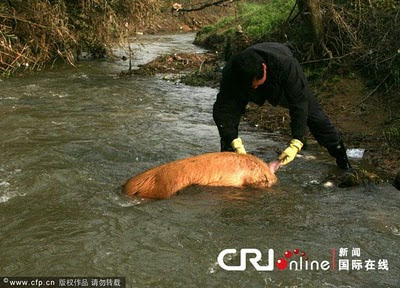 A March 21 article from Zhejiang Online news site reports the results of investigative reporting on the source of the floating dead pigs reported on last week. The bottom line is that nobody actually knows exactly where they came from or why they died. They were from upstream and they probably died from the cold weather, but there's no epidemic.

A few pigs that still had ear tags were traced to four farmers upstream. “We have already taken legal action against them,” was the reassuring pronouncement of an official.

It seems that rotting pig carcasses in canals and rivers are a common fact of life in China. Googling “dead pig” in Chinese turns up a number of local news articles from Guangdong and Fujian Provinces about discoveries of dozens of dead pigs in waterways. In all the stories, local residents interviewed by the reporters seem unfazed by the dead pigs, as if it’s a normal occurrence. Officials always assure readers that there has been no disease epidemic.

The Zhejiang reporter contacted provincial officials and learned about the careful, coordinated efforts that have been made for several years to prevent pigs from being dumped into waterways. Officials blame the extremely heavy rains and ignorance of farmers in upstream “less developed” areas for the appearance of the unusually large number of pig carcasses.

The Qiantang River, which flows through Hangzhou, is fed by the Fuchun and Lanxijiang Rivers. Even further upstream are the Wujiang and Qujiang rivers and other smaller tributaries. “These upstream areas are less-developed and grassroots animal disease control base infrastructure is lacking.” There are six “key” counties and districts in the prefectures of Quzhou and Yixing where there is lots of hog production. The director of the Quzhou animal husbandry bureau says his area produced over 6 million hogs last year. The director of the Yixing Animal Husbandry Bureau explained Yixing is also a major hog-producing area, but management is very strict in taking care of carcasses of dead pigs.

The article explains, “In the process of raising the hogs, there are always a certain number of death losses due to effects like management and feeding situation, but there are few sites available for safe disposal of carcasses. Most hog farms bury them deep, but it is hard to say whether some farmers secretly throw them into creeks.” 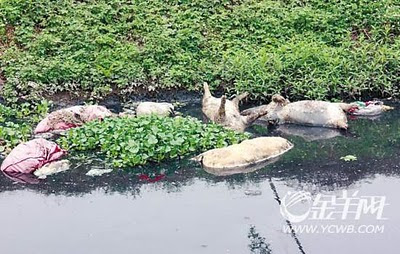 Dead pigs in Guangdong Province, also in March 2010
Garbage and dead animals in the river have been a headache for a number of years. Four years ago, Zhejiang province set up a special coordinated task force for preventing dead pigs from getting dumped in the Fuchun River. The provincial agriculture and finance departments implemented a document, “Construction Project for Fuchun Riverbank Rural Area Sanitary Disposal Pit for Diseased Animal and Poultry Carcasses.” During 2007-09, townships and villages in the six key counties constructed 335 steel disposal pits for dead animals and poultry with a volume of 26,970 cubic meters in 608 villages.

Each area set up township- and village-level animal health monitoring organizations. The six counties used broadcast media, newspapers, leaflets and booklets to publicize requirements for disposal of carcasses of sick animals and rules forbidding random disposal. They organize inspections of waterways each year in April.

The article explains that the upriver area is the province’s major pig production area, where a lot of pigs are traded. Some pigs died due to the cold weather while being transported, due to small bodies and weak immunity. The main transport routes are near the river on both sides. Traders cut off the pigs’ ear tags and dumped them into the Fuchunjiang and Qiantang River waterways. The flooding was unusual in March, and the spillway on dams had to be opened, allowing a lot of garbage and pigs to flow downstream to Hangzhou.

On March 18 (after the pigs became news in Hangzhou), the provincial coordinating emergency committee sprang into action. Meetings were held and teams were assigned to visit all townships along the river for inspections and cleanup. Communities on the riverbanks have to make regular checks from now on. The Provincial authorities are studying how to write a law that will “solve the problem well.”
Posted by dimsums at 7:29 PM