Last year Shaanxi Province exported organic red dates (also known as Chinese jujubes) for the first time. Seven shipments of red dates valued at $210,000 were shipped from Yulin city in the northern part of the province. The shipments were small, totaling just 48 metric tons, but they represent a symbolic breakthrough for this poor remote mountainous region on the border of Shaanxi and Shanxi Provinces. 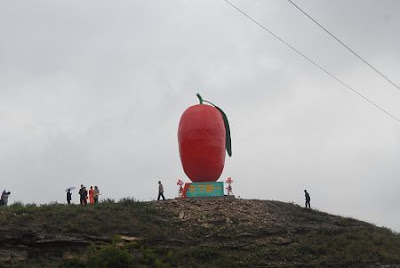 A giant date on a Shaanxi Province hilltop
(displayed on an e-commerce site promoting dates)
The story about the export of dates illustrates the government-business-farmer partnership strategy that China is using to bring products from remote backwaters to a supermarket near you. Apple juice is the most prominent example of this strategy--mostly it comes from the central part of Shaanxi--but jujubes, pears, oranges, kiwis, sausage casings, and other products are also taking this route.

Farmers in the Yulin region have grown dates for many years, but the companies processing them were small and the products couldn't meet international standards. The local communist party and government started a "special agricultural products to benefit the people" program. This apparently is a program that identifies products unique to a local area that can be promoted as exports. The article says that dates join other local products like mung beans, red beans, and buckwheat starch as local export products.

The local branch of the import/export quarantine and inspection authority, known by its acronymn CIQ, implemented a "one scheme for each enterprise" program. The program gave "guidance and aid" to a company--the Jia County Organic Food Ltd Co.--in site selection, purchase of equipment, manufacturing layout. The CIQ office gave the company and farmers assistance in achieving U.S., E.U. and domestic Chinese organic certifications. CIQ officials also assisted the company in registering and attaining certification from them as a food exporter. The Jia County government also gave funding support to the Benefit the People Modern Agriculture Development Co. and Fortune for the Masses Food Co. to produce liquor and other beverages made from dates.

This program is part of the "develop the west" strategy, which brings technology and investment from more-developed eastern regions to develop the poor western areas. Another article describes how agricultural experts from Hebei Agricultural University and South China Agricultural University (Guangzhou) were "invited" by county authorities to give training in each township in growing red dates, insect control, pruning, fertilization and preservation of dates. Teams from Jia County were also sent out on educational tours to other parts of China.

The date exports show that reliance on foreign demand is no longer just a coastal phenomenon. Another article from the Shaanxi Daily reports that a company in Yanchuan County also made its first overseas sales of red date sauce last year. They made sales of $10,000 to Malaysia, Korea, and Hong Kong, and this year it aims for overseas sales of $1 million. It projects sales of 15 million yuan this year, of which only 3.7 million yuan will come from the domestic market.

Look for more "develop the west." A Farmers Daily article apparently issuing the official party line suggested the program--now a decade old--will continue. The article quoted delegates from western provinces at the National Peoples Congress expressing their praise for the program and hoping it will continue. A representative from the State Council Office on western development said the program will focus on developing industrial districts for locally-advantage agricultural and mineral products, like dates.
Posted by dimsums at 5:40 PM