As Chinese enterprises growing crops in Russia bring commodities back into the country at an accelerated pace, inspection and quarantine capacity is being upgraded to handle the increased flow of oilseeds and grain. The trade is still relatively small but it provides a window on how China is gradually ramping up its "going out" strategy to grow crops abroad. 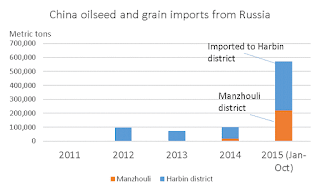 The Manzhouli border crossing reported that 49 rail cars containing rapeseed grown by Chinese enterprises in Russia entered China during the second half of October 2015. These shipments were described as a "prelude" to larger volumes expected this year. According to border officials, the rapeseed comes from production bases established by Chinese enterprises in the Siberian regions of Krasnoyarsk and Kemerovo during 2014. While most soybeans and corn coming from Russia are grown just over the border and shipped into China by truck, the new rapeseed production bases are deeper in Russia--northwest of Mongolia--and strategically located on the old Trans-Siberian rail line that enters China at Manzhouli. 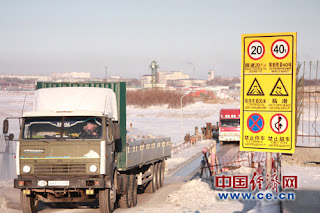 The Heihe border crossing from Russia...looks like a light load.

Several articles from border officials describing the Russian border trade highlight recent measures to upgrade inspection and quarantine capabilities at these relatively minor entry points. The measures are meant to address problems with shipments and increase the efficiency of the inspections to expedite the trade flow.

The Heihe entry point in northern Heilongjiang Province was upgraded to become a "harmonious entry point" in order to accommodate the increased shipments of soybeans and corn from Russia as part of the national "going out" strategy. Shipments re-started in 2011 after a "ten-year interruption" and were expected to reach record volumes in 2015. The Suifenhe entry point in eastern Heilongjiang was approved in October 2014 to accept oilseed and grain shipments after upgrading inspection capabilities. The approval led to a surge of shipments since last year.

According a Heihe official, the inspections were strengthened after friction with Russian authorities arose over smuggling and illegal use of pesticides by some enterprises with "low quality" (presumably Chinese farmers growing crops in Russia). A local entrepreneur who has been shipping commodities back from Russia since 2009 claims that the advantage of the Russia-grown soybeans is their higher quality and lower cost. He explained that Russia follows a European standard that prohibits pesticide and chemical fertilizer use, so the beans are free of toxic pesticides and have lower input costs than those grown in China.

Inspection and quarantine authorities check the imported commodities for the presence of plant disease, fungus, weed seeds, pesticide and heavy metal residues, and genetically modified material. Laboratory testing facilities have been upgraded at the border crossings. Advance inspections and testing before entering China are reportedly conducted to expedite issuance of import certificates and reduce time at the entry point. Transportation equipment and storage facilities are checked to ensure material does not leak out on the road. Authorities say that the imported commodities must be transported directly to a designated processing facility and cannot be sold to anyone else after entering China. The rapeseed shipments reportedly are processed in a plant at the Manzhouli border crossing.

The flow of commodities from Russia is still tiny in comparison with bulk shipments arriving at coastal ports. The "going out" strategy is just getting underway, and industry reports say the flow of Russian soybeans is keeping a lid on prices in Heilongjiang. But it is unclear whether this can ever become a major source of soybeans for a country whose annual imports are approaching 80 million metric tons. The plummeting value of the Russian currency has been a major driver of the increased flow of crops back to China since last year. Nor is it clear whether the shipments would be viable if the Russian currency makes a rebound some day.
Posted by dimsums at 6:34 AM