China produces half of the world's pigs yet it has now become a leading importer of the meat. The Chinese pork industry complains that imported pork is putting downward pressure on prices, but this pressure may be what the industry needs to force it to reach world standards.

According to one domestic industry analysis this month, the soaring imports are causing "resentment and panic" among hog producers in China. The article reports that imports of frozen pork for January through September 2015 totaled 512,000 metric tons, close to last year's total for the whole year. But that total only counts muscle meats.

Another analysis this month reports that imports of all pork products totaled 870,000 metric tons and was up 45% from last year.

The first analysis estimates that pork imports may equal 5% of the country's pork market if imports of variety meats (organs, snouts, tails, ears, etc) and smuggling are added together.

The opening of two inland ports to handle imported meat in Henan Province is viewed as an "historic step" to facilitate imports of pork. The facilities are located in Zhengzhou and Luohe cities. The latter city happens to be the headquarters of Shuanghui Group, the company that now owns the U.S. pork giant Smithfield Foods. The industry views the opening of these inland ports as a measure to streamline Shuanghui's shipments of imported pork for use at its processing plants.

Analysts agree that the lower price of foreign pork is driving the imports. The first analysis reports that Chinese pork price is $1.54 while the price of U.S. pork is $.52 and European pork is $.54 (no units were given, but appears to be per-pound). Chinese prices have been falling since peaking in August. 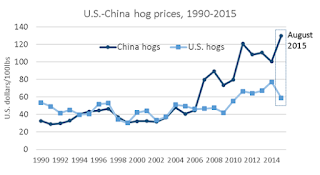 Chinese hog prices historically were comparable to U.S. hog prices until 2006, and China was a net exporter of pork. However, in 2007 Chinese prices rose sharply during a "blue ear" disease epidemic that reduced Chinese supplies. A surge of imported U.S. pork followed in 2008. Ever since then, Chinese hog and pork prices have been gyrating and rising ever-higher.

During 2015, Chinese and U.S. hog prices moved in opposite directions, opening a huge gap. U.S. prices plummeted as the industry recovered from its piglet diarrhea epidemic and Chinese prices bounced back from their depressed level. Europe's exports to Russia have been displaced by that country's ban on imports, depressing prices there. Some of that European pork has found a home in China--European countries are the leading suppliers of China's pork import surge.

Analysts say that pressure from low prices of imported pork is restraining growth in Chinese pork prices, causing a pessimistic outlook for Chinese producers considering expansion plans for next year.

Why are China's prices so high? One reason is the high feed prices. Chinese corn prices are about double those in the U.S. Another is low productivity in China. A critical weak link in China is the sow-nursery segment which is most vulnerable to poor health and disease. The first analyst cited above reports a commonly-recited statistic that each Chinese sow produces 16-to-18 finished hogs, much lower than 25-plus in the United States and Europe. The low ratio reflects high mortality rates, fewer pregnancies per sow annually, and shorter productive lives of sows.

Another pork industry analyst explains that the large number of exits by small-scale producers and disease created a deficit in China this year that imports are filling.

An analysis of the hog feed industry in China by a Chinese feed industry executive observes that officials are now trying to cut back on pig farms whereas in the past they sought to promote as much pork production as possible. For example, he heard that the city of Jiaxing--the source of the dead pigs floating in Shanghai's river last year--has launched a plan to cut back hog production from 7 million head to 1.4 million. In the past, you could build a pig farm without concern for regulations, but now the "threshold is much higher," the writer reports.

The feed executive complains that Chinese hog producers pursue quantity without giving attention to efficiency. In particular, there is little attention to nutrition of sows. He observes that Chinese feed is not good quality "because we are not professional enough." Mycotoxins in grain are a serious problem. The executive reported that he bought some corn in Guangxi Province that appeared to be good quality but had aflatoxins dozens of times the official tolerance level. He criticizes the poor technical level of the feed industry and reports that the quality of feed and even the amount per bag is highly variable.

The feed executive asserts that pig-production facilities are poor, lacking temperature control. He reports that mortality of piglets is high, at 3 per litter or 6-7 if abortions and stillbirths are counted. The analyst thinks that Chinese sows could easily produce 20 finished hogs per year if farms had proper facilities and gave attention to nutrition.

While the pressure from imported pork prices is painful and causes consternation among Chinese hog producers, it ultimately will force the Chinese industry to shape up. The pressure will squeeze out low-performing producers and force those who remain to improve management to boost productivity.