China has announced a new strategy for food security that emphasizes potential production instead of actual production. The new strategy for the 13th five-year plan has a slogan that translates roughly as "land as a storehouse, technology as a storehouse." The strategy calls for idling stressed land to restore its fertility and for relying on technology to produce more from the land.

The strategy was announced in a document entitled "Xi Jinping's Fourteen Strategies for the 13th Five-year Plan." The propaganda article for cadres to study mentions Xi's name ten times -- mostly quotations from him -- and includes four photos of him visiting agricultural areas.

Xi explains that feeding 1.3 billion people is a huge task that China has to do mainly by itself: "China's food bowl must remain firmly in its own hands." Feeding the population is a crucial test of good governance, Xi further explained. 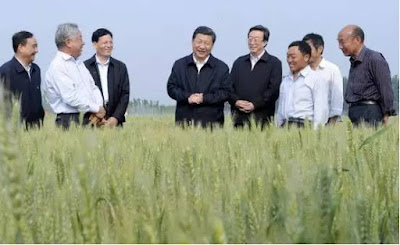 Xi Jinping seems quite pleased with this "high-yielding" wheat field he inspected in 2014.

The strategy has two prongs: land and technology.

The land strategy is typically schizophrenic. On one hand, China must have the strictest land-protection system, preventing its cropland base from declining below the "red line" of 1.8 billion mu (120 million hectares). The newer feature of the strategy is the acknowledgement that land and water resources have been over-exploited. The strategy allows for cropland to be idled or rotated with legumes that restore nitrogen to the soil during periods when there are plentiful supplies of grain -- like right now.

The strategy cites China's excessively large grain inventories and the huge financial cost of storing excess grain as a justification for idling land contaminated with heavy metals, erodible land, and land in areas with shrinking groundwater supplies. The strategy says that farmers can get subsidies -- either in-kind transfers of grain or cash payments -- as compensation for idling land.

The strategy views the idled land as being given a chance to "recuperate." Thus the idled land is a storehouse or reserve for production when it is needed in the future.

The second prong of the strategy is to rely on technological innovation to raise crop yields as the "most basic road." The strategy cites Israel as a country that has used technology to feed its population with few resources while also supplying Europe with vegetables in the winter. The article also cites the United States as gaining a leading position through technology, but Chinese officialdom's obsession with giant agribusinesses pokes through by specifically pointing to ADM, Bunge, Cargill and Louis Dreyfuss as being responsible for this advantage. No mention of Monsanto, Dupont, or the land grant university system. 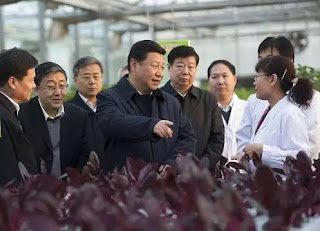 "See that? That's the road to agricultural modernization."

"Agricultural modernization" and "innovation" are centerpieces of the 13th five-year plan. According to Xi Jinping, "The road for agriculture is modernization, and progress in science and technology is the key to agricultural modernization." This entails massive construction of "three networks" of consolidated fields, irrigation canals, and roads. It promotes the scaling-up of farms, mechanization, new-type professional farmers, and services.

The strategy sees "technology" as a panacea that will address problems of low net returns and over-exploitation of resources. Although "technology" purportedly accounts for 56% of the increase in China's grain production, it needs to account for an even greater share. Developed countries purportedly obtain two-thirds of their output growth from technology.

"Technology as a storehouse" is the unavoidable choice for producing grain, the strategy asserts.