A posting on a Hubei Province web site chastises local officials for fraudulently claiming grain subsidies. According to the posting, exaggeration and falsification of subsidy claims are common despite strict regulations governing the distribution of subsidies for grain farmers.

According to the post, cadres faked records to collect extra subsidies. About $1 million in "grain" subsidies were claimed for fields of watermelons. In ten townships, officials padded the land area reported up to the province to collect about $2 million in extra subsidies (the payments are based on area planted in grain in Hubei). Local cadres falsely reported 1150 mu of fish ponds as rice paddies and fabricated 320 mu of rapeseed plantings. Administrators, fish pond attendants, and government office workers all applied for grain subsidies.

The post complains that the subsidies were meant to benefit farmers but instead became "free food coveted by many" as cadres discovered "loopholes" in the subsidy system. The faking of reports and padded numbers arise from a "mistaken understanding" and this "shocks" the general public, said the author of the posting.

The perpetrators are local officials in agricultural and financial departments who file false reports and supervise the reporting and distribution of subsidies. The author of the post says that disciplinary departments are tracking down the falsified subsidies and calls for a system to uncover such problems. 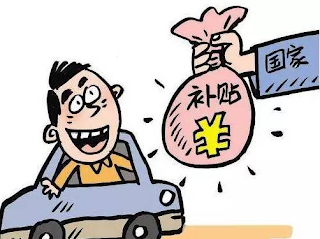 An illustration from an investigation of subsidy reforms:
"The State" offers a money bag labeled "subsidy".

Subsidy fraud is not unique to Hubei, nor to grain (nor to China). The Internet has numerous complaints about subsidies. One recent commentary questions who really benefits from the subsidies. Machinery and seed subsidies benefit merchants and officials who get bribes to include products of favored companies on the subsidy-eligibility list. Farmer cooperatives are started by local officials to reap the subsidies and tax breaks. Subsidies are routinely collected for idle fields. Last year, the agricultural bureau chiefs of half the counties in Hainan Province were accused of illegally collecting 100 million yuan intended for vegetable greenhouse subsidies. In another case in Hubei Province five years ago, eight communist party officials from a county supervision office and several townships were prosecuted for using subsidy funds to pay for roads and other facilities. In other places, officials threaten to reduce the amount of land they report to the county for collecting subsidies if the villagers fail to pay fees for water and health insurance.

The widespread corruption among local officials grabbing subsidies undermines one of the chief original aims of the subsidy program. The Ministry of Finance conducted a survey during the first year of the subsidy program in 2004 concluded that subsidies improved the communist party's image among the rural populace. Although the amount of the subsidies was not large, the survey team said the subsidy program showed that "...the party and the government had not forgotten the common people who plant grain...[and] implementing the program had actually broadened the sincere support for the party among the peasants."

Writing ten years later, the Hubei Province post says the behavior of local officials "shocks to general public." The writer accuses some local officials of lacking a sense of "law and order" and frets about lack of supervision in the subsidy process.
Posted by dimsums at 10:33 PM

This is really tremendous that the way you describe I'll really appreciated your work.hope i'll come back to get some more information .Thanks
ethical hacker network