Chinese authorities are preparing to designate land on the outskirts of cities as "permanent farmland" that will be off-limits to nonfarm development. Local officials have been dragging their heels on implementing the program, and this month a steering committee was set up to force them to literally "get with the program." 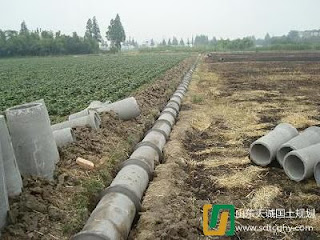 The "permanent farmland" designation program was launched jointly by the Ministries of Agriculture and Land Resources in January 2015. Each province will be required to designate areas surrounding 106 key cities as permanent farmland. According to Farmers Daily, a steering committee was formed in November to push along work on the program. Progress on delineating permanent farmland is uneven and has moved slowly in many regions where local officials have not given it a high priority. "The results are not ideal" so far, according to the statement in Farmers Daily.

The idea of permanent farmland goes back to the third plenum of the 17th communist party congress in 2008. That plenum took the first tentative steps toward encouraging farmland transfer to consolidate farms, but it also decreed that the designated use of "basic farmland" must not be changed. The current leadership is pushing "new-style" urbanization as a top priority in the 13th five-year plan. This year they are formalizing the protection of land designated for grain production to prevent massive loss of land with the new urbanization drive. 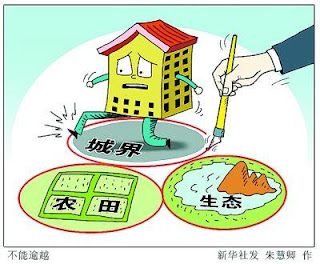 Officials explain that the designation of "permanent farmland" and "ecological" land
is intended to draw boundaries around cities. From Peoples Daily, Nov 2014.

Last week, a vice minister of the Ministry of Land Resources led a steering committee survey team to check up on the work in Hubei Province. The description of the survey in Hubei reveals that "permanent farmland" is considered "multifunctional." The survey team visited a wetland park on the outskirts of Wuhan city and an "permanent farmland demonstration district" in Huangshi City. The program appears to have dual objectives of preserving productive farmland to maintain food security as well as maintaining ecological balance and open space.

The vice minister emphasized that the program is part of three national strategies: food security, new-style urbanization, and ecological protection. The idea, the vice minister explained, is to minimize the development of high-quality cultivated land as cities expand. He said the land designated as "permanent farmland" should be concentrated in large contiguous fields, rivers, lakes, mountains, and forests.

Putting rural land off-limits for development removes one of the major drivers of China's GDP growth. Farmland is valued based on the amount of wheat or rice it can produce. Urban authorities reclassified big swathes of rural land as industrial parks, housing estates, golf courses, and college campuses, thus raising its book-value by a hundred-fold or more. Presto! Huge investment in "fixed assets" appears on the books. Fixed asset investment accounted for roughly half of GDP growth during the years of breakneck growth. Now China needs to figure out how to grow by producing goods and services that people want instead of producing "growth" by administrative measures.

Of course, placing land off-limits for growth also produces tension and conflict as local officials are denied the income and tax revenue from developing land. This is likely a chief reason for the slow progress on "permanent farmland" work.
Posted by dimsums at 9:19 PM

Imagine that, in accordance with State and Federal legislation, Milwaukee were asked to delimit itself with permanent farmland. Might it not that take a few years before the city fathers declared themselves ready?

As to land sales being a growth driver, it's being replaced this year with a land tax – a much wiser, cleaner way to generate a predictable tax stream.