China's imports of sesame seed from Africa have exploded this year. By September China had already imported 700,000 metric tons of sesame seeds during 2015, easily surpassing last year's record purchases. Nearly all of the imports come from Africa (other suppliers include Myanmar, Bangladesh, and India). Ethiopia, Sudan, and Tanzania have been the leading suppliers for a number of years 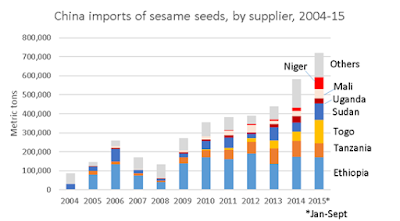 China's Grain and Oils News reports that the flood of sesame was triggered by big harvests in Ethiopia and India that caused prices to plummet. However, customs statistics show that this year's surge of imports comes from relatively new suppliers Togo, Niger, and Mali. The volume of imports from Ethiopia--the leading supplier for the last 10 years--has been relatively stable.

Last year, Nikkei Asian Review attributed a spike in global sesame prices to China's growing demand for imported sesame seed, although it also mentioned a poor harvest in India. This year, prices are falling despite even larger purchases by China. The average price of China's sesame imports has plummeted back to its 2012 level, popping last year's price bubble. A report from China's national radio in June attributed this year's price decline to a strong harvest in Africa in 2014, and said the lower prices had prompted a surge in demand for cheaper African sesame seed. Falling prices had already prompted Chinese farmers in parts of Hubei province to abandon sesame production this year. 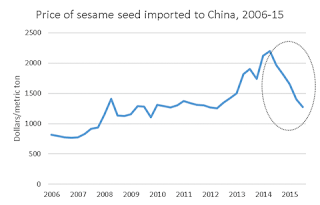 Grain and Oil News reports that the flood of imports is putting pressure on Chinese sesame prices. The imported sesame is cheaper than domestic seeds. Chinese sesame seeds are about $1600-1650 per metric ton in Hubei and Shanxi provinces, but Africa sesame seeds are around $1530 per metric ton at ports in Tianjin and Shandong province. Chinese processors have high inventories and are not eager to buy more sesame. Inventories at ports have grown to a record-high 90,000 metric tons.

The volume of imports so far this year exceeds the amount of Chinese sesame seed production -- about 650,000 metric tons in recent years according to China's official data. The relatively stagnant output numbers however, appear inconsistent with a 50-percent decline in area planted in sesame since 2000. Both numbers are reported by China's National Bureau of Statistics. 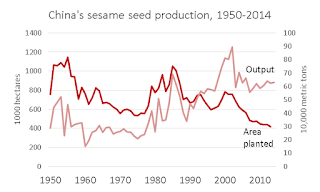 The flood of sesame imports is partly a geo-political phenomenon. China has been fostering stronger relations with Africa for a number of years. In 2009, a bright-red headline in the Peoples Daily announced that Chinese private businessmen were streaming into Africa to invest, and featured one individual called "the sesame king" who was growing sesame seed in Senegal (a relatively minor supplier of this year's imports). After a 2008 summit, Chinese entrepreneurs immediately bustled off to Africa to invest, according to Peoples Daily. In 2014, Premier Li Keqiang visited Africa to bolster economic ties, citing African sesame seeds as one of the most promising trade items.

A more important driving factor is China's elimination of tariffs on sesame seed imports from Africa.  A 2013 Chinese government report on China-Africa trade cooperation highlighted sesame imports as a bright spot and cited the tariff reduction as a beneficial factor. The China broadcasting report also noted the tariff-cut as a factor. 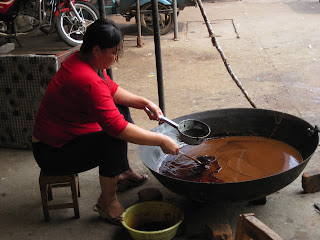 Making sesame oil and paste in a market in Henan Province.

Sesame appears to be another traditional crop grown by poor farmers that is migrating off-shore as China upgrades its economy. Sesame is now planted on about 400,000 hectares in China, down from over 1 million hectares in the 1950s.
Posted by dimsums at 8:12 AM