Chinese communist party members are getting spiritual and moral guidance by studying the life of a man who was the paragon of morality and died at an early age even as he served people with no thought of his own interests. That's right, Lei Feng, a mythical soldier-hero manufactured by Mao in the early 1960s as a model for "serving the people," is back again...resurrected from the dead, as it were.

The campaign comes at a time when confidence in the party is fragile, a path-breaking village election was just held in Wukan village, and the country is doing some soul-searching after the "Little Yue-yue" incident last October when a 2-year-old was run over by two vehicles and ignored by passers-by. Lei Feng is invoked as a kind of substitute deity/saint in a society run by atheists who have no moral compass. 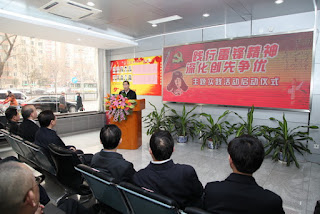 On March 5, the Ministry of Agriculture's Administrative Approval Office launched a special campaign to practice the spirit of Lei Feng. The campaign is an initiative of the office's communist party branch, and the head of the branch's party discipline inspection group gave a speech. As in most speeches given lately, the speaker emphasized that this is a significant year since it's the first year of the 12th five-year plan and party thought and organization must be strengthened and the party must stress clean and honest government.

The speaker stressed that we must recognize the significance of studying Lei Feng in a new situation, have a high degree of political responsibility, a good mental state, a solid work style, creatively pushing the Lei Feng study campaign.


The Lei Feng campaign seems to be nationwide. Quite a few articles report on Lei Feng campaigns. The Liaoning Inspection and Quarantine Bureau gathered at a monument to Lei Feng to lay flowers honoring the 49th year since Comrade Mao Zedong first launched the "Learn from Lei Feng" campaign and the 50th anniversary of his "death in the line of duty." In the Nankai District of Tianjin City, officials gave community residents free advice and medical exams as part of the Lei Feng campaign. 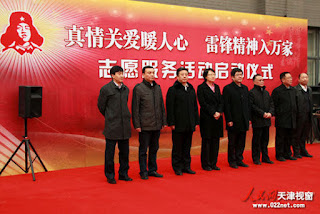 Lei Feng campaign in the Nankai District of Tianjin

At Renmin University in Beijing, a scholar of political thought explains that studying Lei Feng can advance and spread a sense of moral society. "In a complex society," he says, people have varying degrees of morality, but most are pursuing universal, foundational moral standards. A few are advanced and a few are lagging in morality. In the "new situation" [since 1978, that is] of reform and opening and a socialist market economy, social morality is diverse, there are multiple moralities and morality is always changing. The advance and spread of morality coexists with backwardness. There are advanced moral people who imitate Lei Feng and there are backward people exemplified by the "Little Yue Yue" incident in Foshan. Therefore, the professor concludes, we must study and promote the spirit of Lei Feng, adhering to moral ideals, including diverse morals, castigating those with backward morality, condemning and punishing immoral behavior. When asked about people who think studying Lei Feng is an outdated idea, the professor insists that this is completely wrong. He argues that the outrage over the "Little Yue Yue" incident shows that most people desire advancement in morality. 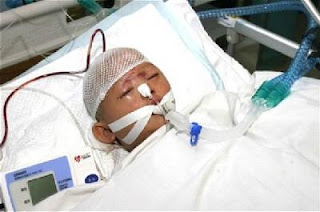 Little Yue-Yue, the girl run over by two vehicles in Foshan October 2011.

The irony is that this "scientific" organization must figure out how to promote morality without a god to prevent society from spinning out of control. It's hard for a party of atheists to keep people in line with no deity, no scripture, no promise of eternal reward and no threat of punishment in the afterlife, so the party has to invent a substitute in the form of Lei Feng who serves as a sort of secular saint. The party is trying to mimic a religious organization by commanding its members to to participate in its rituals, repent of corruption and laziness, and selflessly serve the people.
Posted by dimsums at 10:51 PM