A string of news articles on the pork industry in the city of Shenzhen exemplify the struggle between big "safe" companies and small, cheap "unsafe" processors. Illegal slaughter and marketing of pork is surprisingly resilient. It remains rampant even in one of China's richest cities a year after massive public and government attention was focused on pork sector problems a year ago when CCTV revealed the widespread use of "lean meat powders."
Last month, a Shenzhen news site reported that the daily volume of hogs processed by the city's legal slaughterhouses was down 30%-40% this year because so many pigs are being slaughtered by illegal underground butchers. At one facility that has capacity to process 3000 hogs a day production is just 1300 or so. At another, production is about 60% of the usual volume. Managers complain that they have spent a lot of money renting the land, installing exhaust systems, high-pressure water systems and mechanized equipment, but some people want their pork "a little cheaper," so illegal pig-slaughter is "rampant." 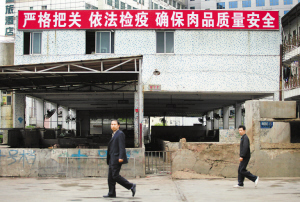 A legal slaughterhouse in Shenzhen

The reporter paid a visit to an illegal slaughter operation hidden behind newly-planted trees. When he got there, the workers had all fled, leaving clothes hanging up and knives lying around. The slaughter took place on a cement platform in an open compound. Trucks would drive up and unload pigs on to the platform where they were slaughtered. Three pumps sucked water from a nearby river which was pumped into the carcasses to increase their weight. A drain pipe washed waste water into the river upstream from the intake pipe, so the waste water was pumped into the pigs.

The reporter visited an illegal slaughterhouse processing 1000 head a day. Another, much larger, facility processed only 200 a day.

This article is one of many on illegal slaughterhouses in Shenzhen, other places in Guangdong, and other cities in China. Another recent article reports on finding traders carrying a half-dozen carcasses with fake inspection stamps. The guys caught with the illegal carcasses said they bought them from an acquaintance who said he got them from a legal slaughterhouse. They were delivering the pork to small restaurants. 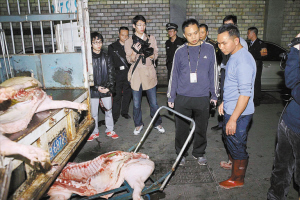 Carcasses with fake inspection stamps in Shenzhen (Source: Shenzhen News Site)
Today in Guangzhou an article announces that 12 people are on trial for trade in illegal pork. According to the article, enforcement personnel have been conducting at least one raid a week over the past year to crack down on illegal pork in markets. The article refers to Guangzhou's "backward" pork marketing system as a factor preventing officials from stamping out illegal pork trade and food safety problems like pumping water into pork. 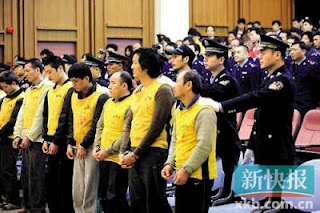 Shenzhen is already taking action to reinvent its pork slaughter-marketing system. The vice mayor of Shenzhen attending the National Peoples Congress in Beijing this week defended the city's plan to build four large modernized pork slaughter facilities that will displace 16 older ones. The first new slaughterhouse recently went into operation and the others are expected to start up soon.

Some people are accusing this new plan of creating a monopoly that will raise meat prices. There is one large slaughterhouse planned to supply each district of the city, giving each on a local monopoly. The new slaughterhouses are expected to use an integrated management model in which they buy hogs under contract from production areas, slaughter them and supply them to final retailers. Under the current system there are 50 wholesalers who pay slaughterhouses to slaughter the hogs and compete with each other to supply final retailers.

Oddly, the article about the vice mayor doesn't mention the rampant underground slaughter points that have lower costs, flout inspection requirements and have undercut the legal slaughterhouses. As long as there is a demand for cheap pork, will officials be able to eliminate illegal slaughter and marketing?


Safe food is costly. "Safe" food processing companies use large modern facilities, expensive automated equipment, they do inspections and tests, hire and train workers who know what they are doing, use lots of clean water and get expensive certifications. This all costs money. These "safe" companies operate alongside hole-in-the-wall workshops that do without all the expensive equipment and produce a product that is often not discernibly different from the "safe" product. Labels, stamps, and trademarks that consumers look for as assurances of safety can all be counterfeited easily.