Two recent postings on online bulletin boards warn farmers that pig disease are becoming more complex and difficult to deal with. China is in a transitional phase from "backyard" production using local breeds to an industrialized system where large numbers of pigs are concentrated in factory-like conditions. Many producers are still using traditional practices in the industrialized modes and this creates dangerous disease vulnerabilities. 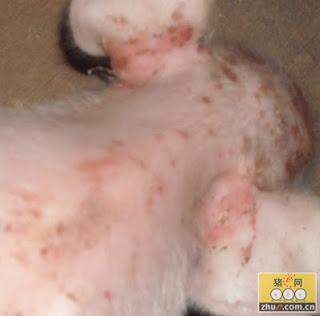 A farmer posted this photo on an Internet forum looking for help with a skin disease.

One posting, "Hog farm epidemic situation is grim;stronger prevention is urgent," appeared on many web sites last week but it appears to have been written in 2008. The article points out ways that diseases have become more widespread and difficult to treat. The writer warns that a pattern has emerged where diseases cause high death rates, then subside before making a resurgence. The writer says that highly pathogenic blue ear disease (PRRS) has followed this path. Blue ear and other diseases that have become widespread are immunosuppressant diseases which he says has led to a resurgence of classical swine fever.


The second article, a veterinarian's advice for preventing disease outbreaks on concentrated hog production farms, notes that diseases are changing and becoming more complex. The writer warns that old forms of disease are changing and new disease symptoms are continually emerging. In particular, he notes the spread of mild forms of classical swine fever, pseudorabies, enzootic pneumonia, PRRS, atrophic rhinitis (inflammation of tissues inside the nose) and other infectious diseases that "are becoming quite serious."


Both articles warn that the changing structure of the industry contributes to disease problems. The first author observes that raising pigs in high density, keeping them in adverse conditions for long periods, emphasizing rapid growth and neglecting disease resistance, unbalanced feed formulas, and abuse of antibiotics pose serious threats to the health of pigs. He points to the low resistance of imported pig breeds that are not accustomed to the climate and feed resources in China as a major contributor to disease. Insufficient attention to inspection and quarantine allowed some foreign pigs to transmit new diseases, says the author. He points out that importing these breeds with a myopic focus on feed conversion and leanness of meat is short-sighted. He calls for developing resistant breeds through government and company cooperation.


The second author says, "With domestic and foreign breeds being propagated some new diseases have spread rapidly, like parvovirus (always present in sow herds), pseudorabies, endometritis and agalactia syndrome. The prevention and monitoring of these diseases is often ineffective, causing serious trouble for the hog industry." He says that new symptoms are appearing and there are many secondary and mixed infections that make prevention and treatment more difficult.


The first author observes that high prices and government subsidies attracted many people to the industry who don't have experience with pig diseases. In the scramble to get piglets, farmers will buy whatever pigs they can get and interregional movements of feeder pigs has increased, promoting the spread of disease. The second author warns that diseases can spread quickly and become hard to control on large-scale concentrated hog farms. He gives a number of tips for creating a bio-secure farm, choosing a site far from roads, elevated, with good ventilation, improving nutrition, using all-in/all-out, raising your own piglets, careful cleaning and disinfection and other measures to prevent disease.


Both articles call for a change in thinking and approaches to treatment. Traditional treatment methods don't always work any more. The first author calls for increased use of Chinese herbal medicine for treating pig diseases. Reacting to epidemics after they occur is not as effective as using preventive measures. The second author calls for veterinarians to change their thinking and practice, to observe diseases and symptoms, analyze all available data and to be proactive.