Livestock bureau officials in Jiaozhou, a prefecture of Shandong Province, announced that they will conduct a big crackdown on "lean meat powders" for the March 15, "Protection of Consumer Interests Day." The campaign was publicized in the news, presumably as an assurance to consumers. No doubt it also sent a signal to farmers and dealers to keep their clenbuterol out of sight until the campaign is over. 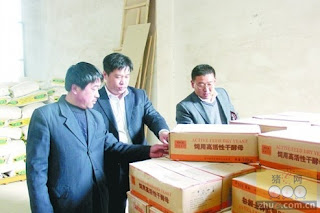 "Lean meat powder" is a general term for a class of beta agonists that channel energy into making muscle instead of fat. They are banned for use as feed additives in China. Clenbuterol is the most common "lean meat powder" but there are about a dozen others as well. "Lean meat powders" created a scandal in March 2011 when a Chinese Central TV broadcast revealed that use was rampant in northern Henan Province.

A Jiaozhou official explained to a reporter that each person in the department has responsibility for certain companies and markets, leaving no "blind spots." The prefecture has 30 feed mills and 6 veterinary drug manufacturers, and someone is responsible for each one. Each member of the inspection department is responsible for 4-to-6 of the prefecture's 170 large-scale farms, 80 veterinary and feed sellers and 9 fresh milk collection stations. Jiaozhou also has 521 medium and small markets and 764 livestock villages with 6632 small farms. These are overseen by 505 village-level disease prevention personnel.