In February the Ministry of Agriculture launched a campaign to maintain the area planted in early rice. For decades Chinese authorities have struggled to get farmers to double-crop rice in eight provinces of southern China. This entails transplanting rice in early spring that is harvested in mid-summer, then followed by a late rice crop on the same land. Many farmers have been abandoning the early rice crop in favor of single-season rice that can be planted later.

On February 29, the Ministry of Agriculture announced an early-rice-transplanting aid program for Jiangxi, Hunan, Guangdong, Guangxi provinces. The special fund allocation of 100 million yuan from the central government finances subsidies for large farms, specialized transplanting businesses, and farmer cooperatives for buying seed trays, plastic structures and other equipment with a subsidy of 800 yuan per mu for plastic greenhouses where seedlings are grown and 40 yuan for fields. A Jiangxi news program shows a farm with a series of plastic tunnels where rice seedlings are grown in plastic trays. The sign describes it as a rice "factory-ized" transplanting model farm. The seedling trays are loaded on trucks and transported to fields for transplanting. 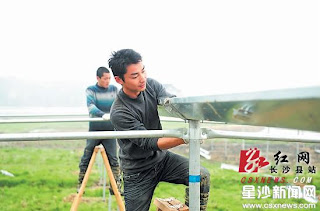 On March 5, the Ministry held a meeting in Hunan Province to promote the early rice-transplanting campaign. The Ministry's chief economist chaired the meeting and praised Hunan for allocating 120 million yuan of its own funds "even though it is not an economically strong province." He said everyone should learn from Hunan.

At the meeting, southern province officials were told to put a priority on early rice planting and promoting the transplanting campaign. The meeting stressed the importance of rice to national food security. Although the "overall supply and demand for grain are in balance," "there are imbalances in regional and commodity structure." At the meeting it was said that rice consumption is increasing and the importance of maintaining food security from start to finish was stressed. 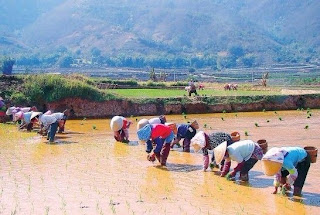 The meeting called for keeping early rice area steady at 86 million mu and promoting a slogan of "single to double." They are trying to mobilize local officials and farmers to promote early-rice-planting. Officials want farmers to switch from directly seeding rice in fields to transplanting high-quality seedlings produced by specialized farms. Their plan is to start the program with large farms and cooperatives as models and promote the new technique to small farms.

Officials are forming large contiguous areas specialized in rice that cover entire townships or counties. They
want to hook up transplanters and seedling producers with large 10,000-mu rice production bases. They also have plans to increase mechanization in rice areas and develop pest control teams.

One of the orders issued at the meeting was to generate lots of publicity and a number of provinces and counties have put out many news articles promoting early rice transplanting.

Xiangtan City in Hunan has dutifully announced a plan to maintain early rice area at 1.52 million mu. The district is promoting three techniques: concentrated production of seedlings, reasonable spacing of plants, and "safe heading." Xiangtan and Xiangxiang City were chosen as models for the province with 130,000 mu devoted to concentrated seedling production operations. Xiangxiang has 10 high-yield districts with centralized demonstration plots for seedling production. Other townships also have a designated demonstration farm, all using standardized varieties, plastic-covered housing, standards for renting fields to seedling producers and specialized management of seedling farms.

On March 14 Liu Saijun, a farmer in Lianmeng village, was busy transplanting seedlings. This year he manages 3.5 mu of early rice seedlings which can be transplanted into 70 mu of fields. He expects the seedlings to germinate by the 18th and be ready for sowing in fields by the 25th.