Earlier this month, Liu Yonghao, founder of China's largest animal feed company, complained that large volumes of meat are smuggled into China. Liu, also a member of the China Peoples Political Consultative Committee, made his comments while in Beijing for this month's annual political meetings.

Liu said that most people don't know that chicken meat is the most-smuggled product--not computers, gold or jewelry. He described smuggling of pork and chicken as extremely "serious" with volumes amounting to several hundred thousand metric tons annually. Liu claims that the smuggling of meat is a threat to food safety and disease control and called for a strict crackdown on it.

[The smuggling is not new and there has been publicity about crackdowns over the past couple of years. Last year the dimsums blog posted an article with photos about a seizure of smuggled chicken feet and industry claims that smuggling was responsible for their low profits.] The article on Liu cites a 700-mt chicken seizure in Guangxi last year, four smuggling cases uncovered in Nanjing during December and 78 raids over ten months in Kunming that involved 1000 metric tons of meat.

Liu Yonghao attributes the smuggling to China's high meat prices. He said that China's average pork price last year was 79% higher than in the U.S. and 48% higher than in Europe. At the same time, Liu points out, Americans don't eat chicken wings [he probably hasn't heard of "Buffalo wings"], chicken feet, or internal organs so these can be bought very cheap from Americans and sold in China's market at a very low price.

Liu worries that the smuggling not only limits Chinese agricultural development but also damages the tax collection system and import-export regulations. He said no one knows whether smuggled meat carries viruses that could enter China and spread all over the country.

Liu claims that importing large volumes of meat is very bad (非常不好). He says an order for meat placed when Chinese prices are at 20 yuan would take half a year to arrive in China after being slaughtered, by which time the price might be down to 15 yuan and Chinese farmers losing money. Then Chinese farmers cut back and the price goes up, creating a vicious cycle.

During the week of Liu's outburst, a reporter for Southern Daily newspaper conducted an investigation that reveals some of the smuggling trade's workings. The reporter heard from a friend who serves American beef in his home that smuggled meat can be procured from a certain frozen food market in Panyu, a satellite city of Guangzhou. The reporter visited the market and saw many stalls offering boxes of frozen meat that lacked the required inspection and quarantine certificates. The vendors all claimed to do import business, claimed that their products were cheap and good quality and claimed to have loyal repeat customers. 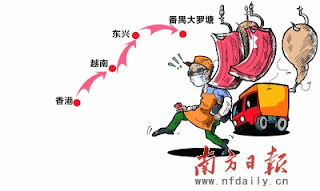 Visiting one stall, the reporter was approached by a smiling lady. The lady asked whether he was a buyer for a restaurant and offered to sell him frozen or cooked chicken wings, "very good for stir-frying." She had her assistant bring out a 15-kg (33 lb) box labeled "Brazilian chicken wings" which cost 308 yuan (about $1.45/lb). The reporter asked whether the quality of the wings was reliable and why there was no inspection certificate. She replied that some of her merchandise has certificates and some doesn't. When pressed on the matter, the lady slipped away to greet another customer.

The reporter spoke by telephone with a Mr. Zhang who is purportedly a big dealer in smuggled meat. He confirmed that there is a lot of smuggled meat in this particular market. He explained that meat from some countries is not allowed to enter China but demand for some products like beef tripe and chicken feet and wings is so great it can only be met by smuggling.

Traders told the reporter that loads of smuggled meat arrive in Hong Kong, then go by boat to Vietnam.  The reporter was told that two border crossings on the Vietnam border in Guangxi Province are particularly popular "for various reasons." During peak times hundreds of trucks a day pass through with loads of smuggled meat. They are transported by 10-ton truckloads that arrive at the market near Guangzhou in the middle of the night.

One individual in the trade explained that meat is smuggled because meat from "disease areas" is not allowed in China, plus duties on meats can be about 23%. So, on a load of beef that is worth 1 million yuan, there could be 230,000 yuan in duties assessed on a legal shipment. The smugglers only get paid 20,000 yuan and the logistics cost is about the same. This is a lot less than paying the duties, making the trade very profitable.

There is no mention in the article of how much the customs officials get.

According to the article there are about 500 companies operating in the Panyu frozen food industry and many legal companies are involved in the long "grey chain" for meat.

Neither of these articles mention that countervailing duties were slapped on imports of U.S. chicken in 2010 after an antidumping investigation found that American chicken feet with virtually zero value in the United States are "dumped" in the Chinese market. No one checked to see that Hong Kong's imports of chicken meat doubled after the duties were put in place. The Southern Daily article worries that smuggled meat from "disease areas" will transmit diseases to China. The only example of a "disease area" given in the article is the United States where mad cow disease "was once found," implying that eating American beef exposes Chinese people to risk of mad cow disease, an absurdly small risk, especially when compared to the multiple hazards present in China-produced meat.
Posted by dimsums at 12:06 PM

nice blog !! i was looking for blogs related of animal feed companies . then i found this blog, this is really nice and interested to read. thanks to author for sharing this type of information.