Pork That Glows in the Dark

There have been a number of reports in the Chinese news media lately about pork that glows in the dark. The Southern Rural News compiled reports on this mysterious phenomenon.

According to a story circulating on Chinese news sites, earlier this month a Mr. Li in Beijing recently bought some pork that gave off a blue glow in the dark. After eating half of it, he began to worry that the pork might be harmful. The vendor who sold it assured him that the pork came from a legally licensed slaughterhouse, complete with inspection stamp. 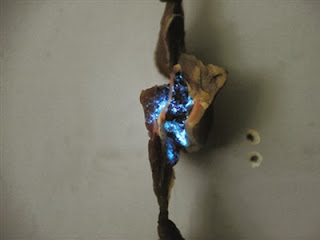 There have been many instances of this "flourescent pork" since 2004. According to the Southern Rural News, in Beijing it has a blue color, in Liaoning green, and in Zhejiang gold. The Internet reports discoveries of "flourescent pork" all over the country.

In Feburary 2010, a Mr. Ma in Changsha got up during the night and saw a strange blue glow on his way to the toilet. He turned on the light and discovered the glow was coming from a slab of pork he had just bought from the Carrefour supermarket. According to this article, a blue glow emanates from both the muscle and fat of the meat. 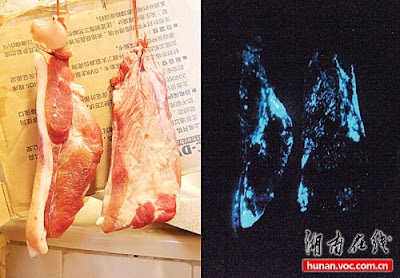 No government department has been able to explain why pork glows in the dark and no one knows whether it is harmful to eat it. Animal health officials say fluorescent pork could be due to excessive phosphorus in feed, or it could be from a type of fluorescent bacteria. Regarding Mr. Li's pork in Beijing, an animal health inspector in Tongzhou district said it's OK to eat it as long as you cook it well. However, the article describing Mr. Ma's discovery recommended that you not eat pork that glows in the dark.

Opinions compiled by Southern Rural News say this incident demonstrates the shortcomings of China's food safety system. As long as the meat is stamped with the required approvals, inspectors are satisfied. Food safety officials don't bother to investigate problems that are outside their current sphere of responsibility. There is no proactive investigation of potential problems. Nobody worries about problems or investigates their causes until they explode as a major crisis.
Posted by dimsums at 3:11 PM