A group of news items published December 8 in the New Capital News sheds light on the continuing struggle to stamp out unapproved pork marketing channels. The articles reveal  that the lower costs of illegal marketing channels are the root of the problem. "Safe" food is typically monopolized and more expensive than food that comes to the consumer through widely-dispersed channels.

The news comes from Tongzhou, a suburb of Beijing. The article features an interview with a bloodied Mr. Hou, who has just returned from being treated for a concussion at the local hospital. Mr. Hou operates the local agricultural produce market in Zhangjiawan Town, just outside the East Sixth Ring Road. On December 7, Mr. Hou heard that hogs from unregistered slaughter points were being sold in the market. He sent a subordinate to confront the accused trader. The trader refused to pay a fine and a vigorous confrontation ensued. Mr. Hou went to investigate and was beaten nearly senseless according to his account.

When Mr. Hou acquired the contract to operate the market two years earlier, he found the incidence of illegal pork-selling was "serious." Since then there has been a crackdown and the number of traders in the market has declined from 37 to 18. However, still only two-thirds of the pork sold in the market comes from legally-designated slaughter points. The other one-third comes from farms that slaughter pigs themselves or numerous unregistered slaughterhouses. 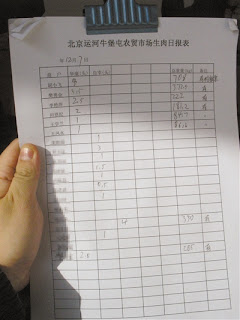 The record of sales for December 7 that accompanied the article listed each trader and the number of hogs sold. There were 20.5 hogs from registered slaughterhouses, 10 from other sources, and 4 in an unlabeled column.

The root of the problem is the higher costs of legal slaughterhouses. Mr. Hou said that the suppliers using legal marketing channels complained about the prevalence of illegal pork when he took over. Mr. Hou explains that the price of hogs bought from legal slaughterhouses is 8-to-10 yuan per 500g while hogs from illegal channels cost only 6-to-7 yuan. The sale price is 11-to-12 yuan, so there is much higher profit from selling cheaper illegal hogs. The designated slaughterhouses charge a fee to transport hogs and slaughter them. There is also a fee for inspection. Illegal marketing channels avoid these costs.

Mr. Hou says the illegal marketing is the "Achilles heel" of the food safety system. Traders go door to door purchasing hogs from backyard farmers. They often use family connections to identify suppliers. The hogs are not inspected and lack legal certificates. The hogs can't be traced to their source. The illegal marketing channels may be associated with other illegal behavior such as pumping water into carcasses.

Mr. Hou says regulation of these small local markets lags behind that of larger wholesale markets and supermarkets. He says inspectors have only checked the market twice during the two years he has operated the market.

However, there were no complaints about the illegally-sold hogs in the Zhangjiawan market. Mr. Hou noted that the merchants selling hogs from legal channels complained vigorously about the prevalence of illegal hogs when he took over the market.
Posted by dimsums at 8:42 PM