China Running Out of Farmers?

Several recent stories have discussed remarkably fast demographic change underway in rural China.  A few years ago rural China was characterized by a massive surplus of labor, but now they are talking about labor shortages. People are asking, "Who will do the farming ten years from now?"

A Guangming Daily article by a Beijing University post-doctoral student reports on the disappearance of nearly all peak working-age adults in a series of villages. One Hebei province village has 458 people registered as residents, but only 216 actually live there. All young people have gone out to work and just a few workers under 60 years old are left. The youngest is a 46-year-old lady. In a Shanxi province village there are 234 people registered but only 130 living there permanently, mostly old people and children. A large survey carried out by the Communist Party Central Committee found this pattern of aging populations was common in villages all over rural China. 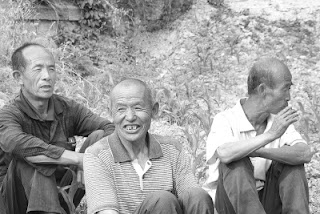 
According to the article, "The outmigration improves the economic situation of people but it leaves a shortage of labor in agriculture; 'shortage of farmers' is a permanent problem." Scholars and policymakers in China worry that the shrinking rural workforce will leave land uncultivated.

With fewer workers recently rural land has been left idle, affecting agriculture stability and grain security. The author cites the example of Binhu village in Hubei where in 2008 40% of the land was left idle, and more than half of farmers cut back from planting two rice crops a year to one.

In Shanxi Province's Zhaojiagou village there is little idle land, but the future is not optimistic. Most workers there are age 60 or older, planting corn and walnuts. Each one operates 20-30 mu of land using human and animal labor. In 5-10 years these old people won’t be able to do the work.

The author warns that the idle land phenomenon will spread if the labor shortage is not solved. Given the seasonality of agriculture, he warns that once land is left idle it could become a vicious cycle, affecting grain security and social stability.

Another article on the "Semi-monthly Online Chat" worries that ignoring the idling of farmland could lead to a reliance on imported grain.

Both authors make reference to the so-called "Lewis Turning Point" where a developing country reaches a stage where it transitions from surplus labor to scarce labor. With large numbers of people entering cities, less labor is available to work in agriculture. The "semi-monthly" author develops the implications for agriculture more fully, warning that the "emptying-out" of villages leaves the elderly and frail behind to do the farm work who are incapable of cultivating several mu of land, so the author says. He says that mechanization and improved technology are critical to agricultural development but you can't do farming without labor.

The authors observe that there has been a sharp decline in children as well, portending even more radical demographic change in the future. The Beijing University author says every administrative village in the Shanxi countryside used to have its own school, but now many have just a few students and other schools have been turned into barns for raising pigs. The schoolmaster in one township says there were 800 students in the 1990s, but the number fell to 200 in 2007 and just 90 in 2009. The junior middle school was turned into a central primary school with just 68 students and 24 staff. There are four villages that still have schools but there are just 21 students, an average of 5 per school.

There are three reasons given for the shrinking number of students. One is a plunge in the birth rate from about 4 kids per family during the 20th century to one or two children now. Another is that many people with school-age children have left the village to work in cities. Finally, many children now go to school in the county city instead of in the village. The shrinking number of students means financial difficulties for rural governments supporting schools. According to the Beijing University author, "If the number of students keeps falling the government’s spending on buildings and teachers will be wasted."

Of course, the shrinking number of children also portends a population explosion in reverse--a rural population implosion--and further shrinkage of the farming labor force. Most young people leave the village to work in factories or construction sites as soon as they leave school. They have little experience or interest in farming. The population is transformed from "grain producers" to "grain users."

The "semi-monthly" author says "we have ten years to wait and watch" or "we have ten years to develop technology and reform agriculture." He speaks in vague terms of "technology," "reform," and "land transfer." He identifies several constraints on rural development: low returns in agriculture, imbalances between rural and urban economies created by the household registration system, poor rural education, and favoring industrial over agricultural investment. He calls for improvement of rural social insurance, reducing the gap between the rural and urban economies, reforming the urban-rural household registration system, improving public services in rural areas, and raising the quality of rural workers.

According to an online survey on "Who will farm in 10 years?" over 70% of respondents thought this is a big concern but only 35% had any interest in actually farming themselves.

Of course, China's agricultural sector could function quite well with a small fraction of its present farm labor force of around 300 million people. The Shanxi village cited by the Beijing University author has a total of 2500 mu of land, equal to about 400 acres, approximately the size of one U.S. farm.

Chinese agricultural officials may be secretly pleased to see the country's peasant farmers die off or moved into old-age homes. Then they will be free of the rural protest headache and free to implement their vision of large mechanized "scientific" farms which has been the holy grail of communist agriculture since early in the last century. In fact, it's possible these "Who will farm in 10 years?" articles are part of a propaganda push to lay the groundwork for new land-transfer schemes, professional pest control teams, and other measures intended to take the "modernization" and "scale-ization" of agriculture to the next level. Let's see what's in the "Number 1 Document" next month.