China's Inspection and Quarantine Bureau testing of pork products discovered nine samples containing illegal additives. A reporter found results of tests of hams, sausages and other meat products on the bureau's web site (the dimsums blogger could not find it) showing that meat processed in September contained a type of "lean meat powder" and nitrites that exceeded legal limits.

The bureau tested 250 samples from 227 meat companies (about one sample per company?) in Beijing, Tianjin, and Hebei. They were tested for 24 different substances. The article included a table showing the nine samples that failed the tests but the table is so small it's not entirely legible. It shows the name of the company, product, and production date but it is not clear what was detected in each sample.

The article reports two of the illegal substances found. One was a kind of sausage produced by a Beijing company that had excessive levels of nitrites, a chemical that is widely used in making sausage (and it used to be a big concern in the U.S.) Another failed sample was apparently a kind of smoked meat from pig heads that contained salbutamol, a kind of "lean meat powder" less well-known than clenbuterol and ractopamine but also banned in China since 2002.

The product containing salbutamol was a famous brand called Yingbin ("welcome the soldiers") produced by a 58-year-old company in Tianjin that used to be one of the four leading meat companies in China. The manager of the company was interviewed by the reporter over the phone. When asked about the problem, he said it originated at the farm level (implying it's not his responsibility) and agricultural officials are "investigating." He said the smoked pig head meat batch was only 35 kilograms, so not to worry.

Well, the salbutamol would have been in all the meat from the pigs--75-to-100 kg per pig. And it probably would have been used in a whole herd of hundreds, if not thousands, of pigs.

All of the failed samples were produced between August 27 and October 5, yet the results were not publicized until late December. Why did it take more than two months to reveal the results to the public? 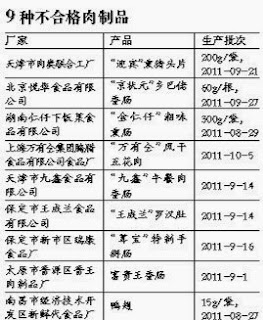