China's pork imports are set to reach a record high in 2011. The climb in pork prices through most of this year has reversed over the last two months and prices have been declining. A number of industry people and journalists are putting these two pieces of information together and concluding that imported pork is driving down Chinese pork prices. 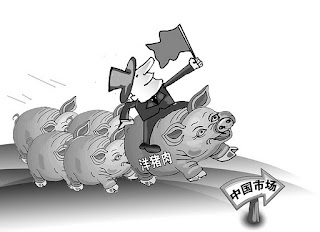 A feedtrade.com.cn online poll asked respondents to identify the reason for declining pork prices. Of the 152 respondents, nearly half said imports were the main reason for declining pork prices. Less popular reasons were: "producers are selling lots of hogs because of worries about disease," "producers have expanded and market supply has increased due to government policies," "producers are slaughtering as fast as possible because they see prices starting to go down," "the price was very high before and naturally is going down now."

On an online bulletin board where a similar query was posted most respondents said there are multiple reasons and you can't identify a single reason for declining prices. One respondent said the government is allowing pork imports to ensure that "low-priced" "coolies" working on construction sites can afford to buy meat, hence keeping labor costs down and preventing housing costs from rising. Others said it was due to disease and merchants driving hog prices down.

The International Commerce News quoted the chairman of the animal husbandry association who said this year's pork imports will surpass 1 million metric tons, breaking the record set in 2008. According to this article, imports from January to September totaled 870,000 metric tons.

The article says that imported pork is pressuring the domestic market, noting that prices had fallen 8% in November. It asks whether the imports are a filling a gap in the market or an "attack."

Mr. Ma, the chairman of the animal husbandry association, says imports are one reason for the decline. He says declining consumption due to substitution of poultry for pork is another reason. Ma is opposed to pork imports, saying that the domestic pork supply is adequate and imports "are not needed." Imports just pressure the market and drive the price down, leading to turmoil in the hog market.

Ma says imported pork has a “new type of lean meat powder,” called ractopamine, that is hard for testing organizations to detect. Ma should know that ractopamine is not new and is used widely in China.

Ma says importing companies can’t just pursue the interests of their companies. They have to consider the country’s long-term interests. In his view, importing pork to stabilize price is a kind of short term behavior. “In meat, consumers choose the easy way, discouraging farmers.” He says, "Both are meat; this way is completely unneeded." Mr. Ma thinks the government should stabilize the overall pork market rather than rushing to import pork.

Another opinion is offered by Qiao Yufeng, who thinks that importing pork gives consumers more choice. Industry competition promotes development of the domestic meat industry. There is no need to “cry wolf” over foreign pork.

Meanwhile, a journalist in Hefei, Anhui Province, notes that people are talking about the "foreign pork" driving down prices and went out to find out whether foreign pork is on the dining tables in Hefei. The reporter visited supermarkets and a wholesale market and couldn't find any foreign pork anywhere.

One worker at a supermarket meat counter in Hefei said, "We mainly sell pork from Hefei and north of the Huai River, but no imported pork."

A supermarket shopper said, "Foreign pork? Never heard of it." The shopper admitted he never checked the origin of pork he buys.

A worker at a Carrefour supermarket said, "We sell pork from Hefei and Luohe City in Henan. I've heard of foreign pork but we don't sell it."

An elderly shopper expresses disdain for foreign pork. He prefers local pork which has a strong flavor good for roasts and soup. The gentleman says he would never buy foreign pork: "Even if the price is low, it's not as good so how could I eat it?"

The reporter then went to a wholesale market in Hefei and again found no foreign pork. The meat manager said, “The market has no imported pork; selling imported pork is not allowed.”

So where is this imported pork?

The International Commerce News article quotes a pork industry analyst who points out that imports are "a drop in the bucket" for China's pork consumption of 50 million metric tons. A Shanghai meat trader explains that most of the imports are organs, feet, and tails. Only about 10% is muscle meat cuts. He explains that foreigners don't like to eat organ meats so these cuts are cheap and have a price advantage in the Chinese market. The price of muscle meats is higher and these meats are less competitive. The article doesn't explain that much of the imported meat is purchased by processors who use it to make sausages and other processed products.

Still, the article says the pork imports are a "wake up call" for China's pork industry. The writer insists the industry must change its mode of operation to promote larger-scale producers. People are quitting hog-raising, going into cities and eating more meat, leaving fewer people raising pigs. The bottlenecks are lack of land, lack of cash, and pollution problems. The writer says crop production should be integrated with hog production. Using manure as fertilizer for crops supplies more feed and addresses the pollution problem. He says the government should address the cash problem by attracting more investment to the industry through the "demonstration" role of dragon head enterprises.