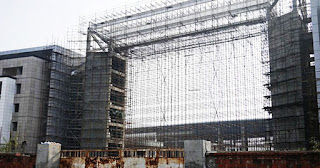 Economic Times posted a report that Wangjiang, designated as a "poverty county" in southwest Anhui Province, is constructing a palatial office building that reportedly "is bigger than eight American White Houses." An investigation team from the local prefecture, Anding City, said that the building's size does not exceed the standards.  However, the team said the approval is not entirely complete and hinted that problems could be found with the interior decorations or other issues.

These are the kind of shenanigans the central government is trying to crack down on. For example, regulations on cash "awards" for grain-producing counties explicitly forbid spending funds on automobiles, "training centers," and "image-building projects."
Posted by dimsums at 3:35 PM