Worried about the rice crop

This summer's heavy flooding washed out significant portions of the early rice crop and in some places rice had to be re-planted. Apparently worried about this fall's rice crop, the State Council held a special meeting on August 11 and announced special measures to support the late-season rice crop. 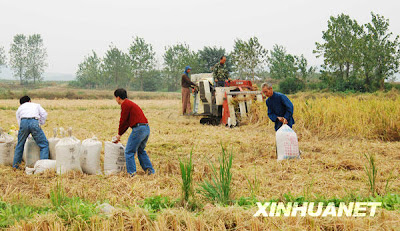 Harvesting late-season rice on a farm in Jiangxi Province. Those guys in blue jeans don't look like farmers.

On August 25, the Ministry of Agriculture announced special policy measures to support fall grain production in nine major rice-producing provinces: the three northeastern provinces and six southern provinces. Extra subsidy funds have been handed down to the provinces and they are being used in various ways to subsidize fertilizer and pesticides to promote plant growth at the key stage and prevent plant diseases and pest damage. The amount is apparently not announced, but the MOA press office says it learned that 10 million yuan was allocated in Jiangxi Province to add 10% to the annual "awards" given to major grain-producing counties. Hubei, Anhui, and Liaoning are giving subsidies for fertilizer and pesticide purchases. Heilongjiang is utilizing plant protection teams, rice grower cooperatives, new fertilizer application machinery and airplanes.

The Ministry of Agriculture held a meeting to tell everyone to implement the policies, to get the money to farmers and into the field as fast as possible. They are supposed to organize teams to teach farmers how to treat plant diseases and apply fertilizer. In Zhejiang, officials bought fertilizer in bulk and distributed it directly to farmer cooperatives in villages. In Guangxi, agriculture officials assigned 14 work-teams to each part of the province. In Heilongjiang, provincial-lvel officials set up county-level technical guidance teams that are supposed to give training through local cooperatives.
Posted by dimsums at 3:00 PM