Lately there has been lots of news about workers striking in China, but now pork merchants have gone on strike. The incident provides a close-up look at the recent rebound in pork prices and how it is affecting the market. 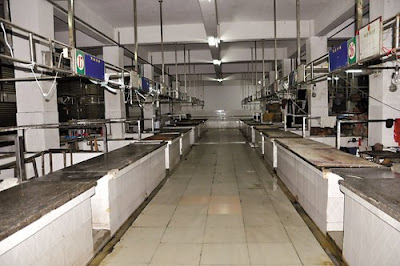 In the city of Shaoguan in Guangdong Province, operators of pork stalls in the city's meat and vegetable markets went on strike last week. A reporter went to several markets and found the pork sections completely empty except for one operated by the city's food company. A stall operator sitting on the sidewalk outside the "East is Rising" market told the reporter that all 100 pork stalls had decided to shut down the previous day.

The pork sellers accuse a local boss of securing a monopoly of the city's four slaughterhouses and forging a new sales agreement that more than doubles the cost of slaughtering pork. Previously, farmers' pigs were slaughtered for a fee of 46.5 yuan per head, but recently the fee was raised to 100 yuan. This raises the costs for the retail sellers and they claim they can barely earn enough to pay the rent on their stalls. So they decided to go on strike.

After the strike was announced, residents rushed to the market to buy pork. One stall keeper said every stall sold about 2 heads of pork in two hours. Restaurants have had to go to a neighboring city to buy pork.

The slaughterhouses claim that there are many reasons for pork going up in price. Some of the pork in Shaoguan comes from neighboring provinces, Hunan and Jiangxi. Flooding in Jiangxi has made transportation difficult, reducing the supply. Because of the hot weather, more pigs die en route to the slaughterhouse, also reducing the supply. Higher feed prices have driven up the price of hogs. Interestingly, there was a similar strike in Guangzhou in 2007 when hog prices were soaring.

The city government called in representatives of the pork vendors, the slaughterhouses, and traders to negotiate a truce. An agreement was reached late at night to cut the fee back to the previous amount.

The reporter went to the markets again the next day and found that most of the stalls were still closed. A stall keeper on his motorcycle outside a market had just returned from the slaughterhouse. He told the reporter that their purchase price had only been reduced by a few cents and they were still unhappy. They could understand if flooding or feed prices drove up prices, but they won't tolerate monopoly.

A worker at a slaughterhouse said the price might be reduced somewhat, but certainly not back to the previous level.

The vendor at the city-owned pork stall opened late that day. He told the reporter, "Kindergartens and cafeterias don't have any pork to serve. There has to be a compromise."
Posted by dimsums at 9:01 PM