Secretary Hu's Letter to the students

In Richard McGregor's new book, The Party, Warren Buffett is quoted as saying he has never met a real communist in China. While virtually everyone in China has abandoned the ideology, the party still plays an important role in mobilizing the people who matter to do what the leadership has decided is important. It acts as a vast behind-the-scenes network that is probably more similar to the role of Freemasons in early U.S. history than Democrats or Republicans.

A recent Xinhua news service report, apparently announcing a campaign to mobilize students to bolster "modern agriculture," provides a glimpse of how the party continues to operate in much the same way it always has. It revives some elements of the cultural revolution: sending students down to the countryside and rebelling against parents' wishes in order to serve the motherland. It even incorporates a descendent of the state farm system where thousands of students were sent in the 1960s to act as cannon fodder against an expected Russian Invasion. 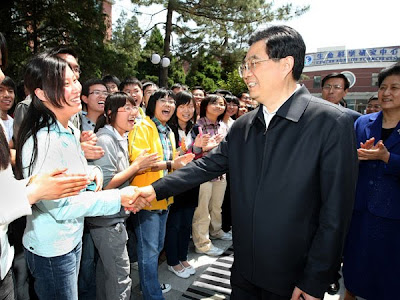 On May 4 (this date commemorates the student protest movement in 1919 over China's raw deal in the Versailles treaty), students and faculty of China Agriculture University gathered to study a letter from General Secretary Hu Jintao (he's referred to as president for foreigners but in China he's the secretary of the party). General Secretary Hu visited China Agricultural Unversity last year on May 4. In April of this year, the students sent a letter to Hu reporting on their diligent study and practice over the past year in response to his challenge.

To their great delight, General Secretary Hu sent a letter of reply, which was read at the May 4 meeting. The letter emphasized that solving "the three rural problems" [agriculture, rural people, rural economy] is of the utmost importance to the entire communist party, and putting "agricultural modernization" into practice is a basic task for the country's modernization. Spreading agricultural science and technology on "a wider stage" is a great responsibility of agricultural university students. "We cannot just enter and leave the rural areas, we must strengthen them and help them prosper."

At the meeting it was noted that the university has signed an agreement with the state farm system to send graduates to Beidahuang, a food conglomerate run by the descendents of state farms on the border with Russia.

A student named Li rose to give his testimony: "At first I wanted to stay in Beijing to work, and my parents wanted me to stay in the city too, but the central committee's support for 'three rural' policy absorbed me."

The article says that Li found the living and working conditions in Beidahuang quite satisfactory after a visit last year and decided to go to the grassroots to build the industry.

Li continues, "I am a seed planted by the agricultural university, ready to live up to the general secretary's hopes. I will use my knowledge and wisdom in the motherland's vast land during my fleeting youth."

A professor Sun gushes, "While the general secretary's letter is not long, its contents are abundant and it's full of encouragement and hope. From these words we can see his concern for 'three rural' problems and his expectation that agricultural universities and institutes will develop. As professors, our great responsibility is to use science and technology to develop agriculture."

Ke Bingsheng, president of the university wraps up by reminding everyone of their responsibility to deepen educational reforms, cultivate talent, and provide good service to the countryside.
Posted by dimsums at 7:31 AM