China's hog market was in free fall from December until June. Hog market reports were grim reading until the last two weeks. Suddenly, after being mired in losses for months, on July 29 the National Development and Reform Commission announced that the hog-corn price ratio has rebounded to the profitable range. 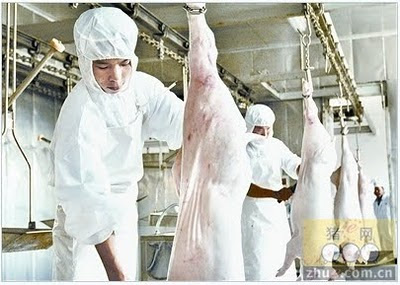 The Ministry of Agriculture (MOA) is eager to take credit for the rebound. An article cites the government's reserve purchases of frozen pork, MOA's "early warning" system monitoring of the sector, publication of inventory, slaughter and price statistics, and its "guidance" for producers in structural adjustment. According to MOA, because farmers had such good information they did not slaughter sows as in past downturns (specifically, 2006).

Other analysts cite serious disease problems in the first half of the year as a factor that depressed prices. Disease killed a lot of feeder pigs. Foot and mouth is cited most. A serious new threat is type-O foot and mouth, which just appeared in China for the first time this year and 11 outbreaks have been reported in 8 provinces this year. There were also 5 counties where blue ear disease outbreaks were reported.

Floods in southern China are cited as restricting supply currently.

Others point to a normal cyclical process. Some sows were culled, but not huge numbers as in the 2006 downturn. Slaughter during the first half of 2010 was up 4% year-on-year. Sow inventories are down down 3.1% from last year at this time, and down 4.7% from December. Apparently the excess inventory has been liquidated.

One interesting strategy is revealed by a Hunan farmer who has a pen with huge 150-kg hogs. He told a reporter that he delayed slaughtering them during the low-price period, waiting for a rebound.

But maybe the subsidies are responsible for the surplus of hogs. In Wangcheng County of Hunan, a reporter describes a livestock production zone where farmers keep their pigs together, built with government subsidies for "standardized" hog farms and "awards" for hog-surplus counties. The manager reports that with help from the subsidies the farm held out through the period of low prices, losing 1 million yuan, and now plans to expand its 2600 head to 4000 head.

At the same time, small-scale "backyard" farmers have dropped out. According to MOA statistics for Hunan, 53% of its hogs were raised on farmers with 50 or more head in 2009, up from just 17% in 2000.

Will the small farmers come back? Another manager of a large farm in Hunan complains that he lost 100,000 yuan per month during the first half of the year. He worries that more farmers will be attracted to the industry when they hear the price is rising again.

There is also upward pressure on prices from rising feed costs. The corn price rose 16 months in a row and is up 16% from a year ago. Maybe the quantum leap to large-scale farms increased corn demand, pushing corn prices up.

Hog prices are expected to rise as the peak season arrives after September. At a new electronic hog exchange in Hunan opened last year, hog contracts for August are trading at 12.05 yuan and 13.3 yuan for December.

The consensus seems to be that price increases will be moderate; not a huge inflationary jump as happened in 2007. One official, queried on this, replied, "no way!" This time, he says, sow inventories were liquidated in a "reasonable" manner.
Posted by dimsums at 9:46 PM