China's corn glut is getting worse after its farmers produced another record crop. With demand still tepid, the government is buying up the surplus to make sure farmers are able to sell their grain. 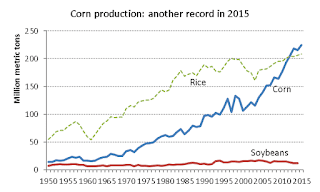 In some areas, farmers have had difficulty selling their grain, but Chinese propaganda organs have been trumpeting the government's efforts to buy up corn.

According to the Jilin Province grain bureau, the government moved up its "temporary reserve" purchases a month earlier to November 1 in order to buy corn before it turned moldy.

The Heilongjiang Province grain bureau said it bought 23.5 mmt of corn for the temporary reserve and 11.5 mmt of rice at minimum prices during November. These "policy-type" grain purchases accounted for 77 percent of the grain procured in the province.

During October and November 2015, the government's Agricultural Development Bank issued loans totaling 122 billion yuan ($19 billion) to purchase 45.3 mmt of fall-harvested grain (corn, rice)--up 16.3 mmt from the same period last year. According to the article, the Bank's large loans reflect the dominance of government purchases in the market. Loans for policy-type purchases are twice as high this year, while loans for market-type purchases dropped 60 percent.

Farmers Daily was pleased to announce that farmers in Shandong Province were having no problem selling their grain. They attributed it to the large number of processors and feed mills in the province and to the temporary reserve policy in northeastern provinces that is sucking corn into government granaries. In Shandong the government has started taking measures to help farmers store grain on-farm. In Zhucheng, 11,000 model farmers got subsidies to pay for three-fourths of the cost of steel storage bins. Large-scale farmers got approval to put drying and storage units on land designated for crop production.

Farmers Daily said there was little business at grain depots during November because Shandong farmers sold their grain immediately after harvest in October so they could get back to their jobs in factories and construction sites.

After plummeting during September and October, corn prices bounced back in early November as the temporary reserve purchase program began. However, prices were still below their September level and below the 2000-yuan "temporary reserve" price floor. This past week the market appears to have become confused with prices dropping sharply in some places and rising in others.

While authorities have pledged to let prices reflect market forces, they can't let corn prices fall enough to equilibrate supply and demand. First, they worry that farmers might abandon corn planting in huge numbers, leaving China with a big deficit in the future. Officials quote Xi Jinping's assertion that Chinese bowls must be filled mainly with Chinese food and officials warn that there must be no relaxation on food security concerns. Second, narrowing the urban-rural income gap is a key objective of the 13th five-year plan. Officials say the cherished "well-off society" maybe achieved by 2020 and brag about the miniscule narrowing of the urban-rural gap. Thus, they can't afford to allow grain prices to fall to lose ground on this objective either.
Posted by dimsums at 11:16 PM