China's cotton production continues to decline while concentrating in its far west Xinjiang region which accounted for 62.5 percent of national cotton output in 2015. The Statistics Bureau explained that the decline in cotton area was especially steep in eastern regions. Production fell more than 17 percent in the Yellow River and Yangtze River regions. Production and area also fell in Xinjiang but not as fast. According to the Statistics Bureau, Xinjiang's cotton area declined 2.5 percent in 2015 but its output declined 4.7 percent. 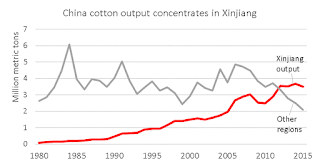 Cosmic Trading International is a renowned agricultural products or crops exporter of Bangladesh. We export natural sesame seeds, yellow corn, fresh potatoes, peanuts, green mung bean, chickpeas and other agro foods from Bangladesh to any other country at a reasonable price and through a quick shipping.
for more information click here