Press "ctrl-alt-del" to reboot agriculture in China. The country's leaders have ambitions to vault the industry from medieval peasant-style farming into 21st century "Agricultre 4.0" of wired-up fields, warehouses, trucks, and retail platforms.

On December 15, a ceremony was held in Beijing to launch an alliance to promote wired-up agricultural business in China. The association has the clunky name of "China Agricultural Product Internet of Things Innovation Alliance" (中国农产品物联商务创新联盟) and it consists of government offices, companies, educational and financial institutions engaged in "smart" agriculture and e-commerce.

The "Internet of Things" involves the use of sensors, GPS, gauges, thermometers, and other gadgets in fields, tractors, drones, greenhouses, trucks, and warehouses to collect information on environmental conditions, plants, animals, and produce. The data can be transmitted, stored, compiled and analyzed to apply water and chemicals in precise quantities, adjust temperature, and track products through the whole supply chain. The European term "Agriculture 4.0" is being used in China. The Chinese alliance is marrying "Internet of Things" to rapidly growing e-commerce in food products, envisioning the wiring up of the whole supply chain from farm to consumer.

The alliance's vision statement hits on nearly all of the latest official economic strategies and buzzwords for China's new 13th five-year plan: innovation, agricultural modernization, integration, services, food safety, environment, and poverty alleviation. The alliance focuses on the whole supply chain: farming, processing, storage, transport, commerce, and distribution. The alliance's vision is to "test the environment, control production, and trace quality" through the six stages of the supply chain.

The alliance has a "great dream" for a rural makeover:


The "great dream" hits on most of the new official strategies enshrined in the 13th five-year plan. It links up and integrates farming, processing, and service sectors. It replaces uneducated, small-scale, part-time, peasant farmers with large-scale, full-time, educated "professionals." It breaks down barriers between countryside and city and aims to transform the countryside from a poor, dumpy place into a place of scenic beauty.

In typical Chinese style, it aims to engineer ecological balance. To westerners, "organic" and "ecological" convey a vision of nature without human interference. The alliance describes its carefully engineered network of big, capital-intensive farms, computers, and drones as "ecological," "organic," and a "circular economy." The leader of the alliance is the communist party secretary of Daxiangshan Group, a company in Henan's Baofeng county that sells food products from areas purportedly free of pollutants.

The alliance appears to be designed to benefit a particular locality in Henan Province. Daxiangshan Group--the featured company--is an amalgamation of companies in Baofeng County, Henan Province. Others at the founding ceremony included the head of "Old Liberated Areas Development" at the National Poverty Alleviation office (many of the areas that were the first to come under communist control in the 1940s are chronically poor). The leader of the "Old Liberated Areas" office from Pingdingshan City in Henan, the director of a high-tech development zone in Baofeng County, the secretary of the Henan Provincial communist party committee, and a professor from Henan University are also featured participants in the alliance. All other participants identified were from official organizations and companies in Beijing. There are model programs to develop Internet of Things for agriculture in Shanghai and Anhui Province but there is no mention of companies or organizations from those localities in this alliance. It's probably entirely coincidental that this association is focused on Henan and Premier Li Keqiang previously served as governor of that province. 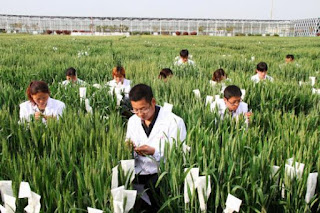 A smart agriculture demonstration center in Anhui--apparently it was
not invited to join the agricultural internet of things alliance.

The Internet of Things intends to guarantee food safety by enabling traceability. By giving every box of vegetables a number and digital code, they can be traced through the whole system. Consumers can find out where their food came from, and problems can potentially be traced back to their source. The government's agency for plant and animal inspection and testing is a participant in the alliance.

"Alliances" (联盟) are a new fad being pushed by Chinese officialdom for the 13th five-year plan. Other alliances of food testing labs and family farms have also been announced this year. These are not organizations spontaneously arising from grass roots collaboration; they are carefully crafted and controlled associations of big companies, government organizations, and research institutes whose creation is orchestrated by the communist party. The alliances reflect the strategy of tying together companies and publicly-supported research institutions to promote innovation. The alliance's founding ceremony was hosted by the China Agricultural University's College of Information and Electrical Engineering. Guanghua Foundation, a government vehicle for supporting high-tech, is another participant. A Ministry of Science and Technology official described the agricultural Internet of Things alliance as a community of shared interests for wisdom and innovation. The strategy is intended to address a chronic problem of missing innovation: Chinese companies devote minimal effort to R&D while research institutes and universities pursue theoretical laboratory research with scant concern about practical application.

Information technology has great appeal for China's mandarins. It appears to offer the means to organize a chaotic economy. Supply chains are much neater and easier to control than the messy webs of small-scale farmers, traders, workshops, and retail vendors that have come to dominate China's food markets.

The wired-agriculture alliance is called a "convoy," an interesting shift from the popular naval metaphor of an "aircraft carrier." The metaphor implies neatness and organization that contrasts with the chaotic image of Chinese harbors littered with small fishing boats. However, convoys are expensive, inflexible, and require great effort to make a change in course. For this reason, commercial vessels never travel in convoys (unless they're worried about pirates or enemy attacks). The chaotic flexibility of China's microenterprises that popped up as soon as control was loosened during the 1980s may have been the secret of the country's economic success.

China's mandarins are subconsciously designing an economy that looks a lot like central planning dressed up with technology. A spider web is harder to break than a long chain. Can one-dimensional "chains" produce as strong an economy as multidimensional "webs"? Can synthetically created "associations" function like the grass roots industry associations in other countries they are desgined to mimic? Can information technology overcome the cronyism and organizational dysfunction that are the real problems undermining China's economic growth?

Given China's astonishing growth history, it would be interesting to know what, exactly, our Western governments are doing to undermine our nonexistent growth.