China has too much pork. Breathless stories (like this one from the December edition of The Economist) about its supposedly insatiable demand for pork are still coming out, yet the Chinese swine industry has been shedding excess capacity for the last two years. The number of sows--essentially the machines that turn out pigs that become pork--has declined nearly every month for the past two years (if we are to believe the dodgy numbers) as negative margins between pig prices and feed costs induce farmers to quit or scale back. The number of sows is down to about the same level as 2008. In 2009, the Chinese government concocted a program to rescue the industry from such downturns by buying up frozen pork, but a recent article by a Chinese swine industry web site reported that warehouses are now filled with pork carcasses. The article estimated that China has 510,000 metric tons of excess pork capacity. 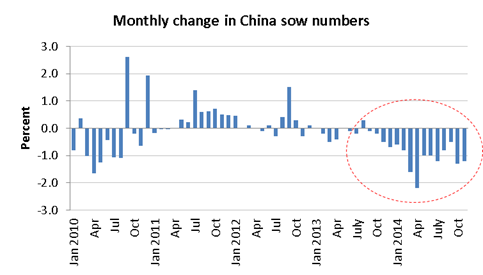 China's poultry industry has excess capacity, attributed to avian influenza outbreaks the last two years, and it faces a shake-out of farms. The top four poultry companies lost a combined 300 million yuan in the first quarter of 2014. The head of China's livestock industry association said the country had a surplus of grandparent-generation flocks in 2013. It has been rumored that Chinese officials have a plan to boost poultry and egg exports early in 2015 to use up some spare capacity.

The feed industry has excess capacity. Feed industry output went down in 2013 and fell again in the first half of 2014 after posting annual growth of 8%-10% for years. A June 2014 article said, "Some people thought there was excess capacity in the feed industry as early as 2008, but with the passage of time the excess capacity problem has intensified." China's feed industry association said there were over 10,000 feed enterprises in China in 2013. The number is expected to fall to 9000 this year. The article estimates that five of the top feed manufacturers are utilizing about 50 percent of their production capacity. Lysine, a feed additive made from corn, is said to have 2.3 million metric tons of production capacity, nearly three times the actual demand.The chairman of China's largest feed company says the market is saturated and competition is fierce. He says margins are continually squeezed by rising wages and fringe benefits, increasing food safety requirements, and demands for new product development.

An article last month celebrating the opening of futures trading in corn starch on the Dalian Commodity Exchange proclaimed that the starch industry has serious excess capacity. Corn represents about 80 percent of starch production costs, and China's corn prices are now the highest in the world. The article says that much poor quality corn with high moisture stored in the open in the northeastern region can't be used by starch manufacturers except for making paper. The article says that environmental regulations and lack of financing are pushing out small manufacturers. Large companies--the article says--can withstand the downturn because they have their own electricity generation and can make money from further-processing.

As flour-milling expanded over the years, excess capacity became more and more of a problem, concluded a report by Henan Province's statistics bureau earlier this year. In June, Henan's flour-milling capacity utilization was estimated at 46 percent and just 18 percent for small and medium mills. Economy Daily reported that the flour industry's capacity had doubled in five years while wheat production rose only 20 percent, creating a serious excess capacity problem.

Last month, a business news publication reported that 80 percent of rice mills in China's northeast are idle because most of the unprocessed paddy rice is in a "rice lake" held in government warehouses.

Well, China should grow more fruits and vegetables since they are "labor intensive" and in China's "comparative advantage," right? No, these industries also have excess capacity. It has been pointed out that China already has 80 percent of the world's greenhouses and produces two-thirds of the vegetables in the world.

The Hubei Daily reports that a 300-acre development of greenhouses on the outskirts of Wuhan has been abandoned and fallen into disrepair. A real estate developer whose construction business dried up was enticed by the local government to plant vegetables with a subsidy of 10,000 yuan per mu (about $10,000 per acre) to build the greenhouses. The project lost money and was soon abandoned. The scheme was part of the "vegetable basket program" that subsidizes big vegetable production bases to supply city food needs. The reporter wonders why such a program is needed since Wuhan has had plenty of vegetables for the last 15 years. He thinks such wasteful subsidies are common throughout the province and nationwide.

The industry that produces the metal frames for the greenhouses is also suffering from excess capacity.

A 2013 research report proclaimed that China's tomato paste and apple juice industries have serious excess capacity problems. Tomato sauce capacity utilization was estimated at one-third in 2012. Both products come from remote areas of western China and nearly all the products are exported since there is minimal domestic demand. They are generic products that came to dominate the market because they were cheap. Exports were pummeled by the world recession in 2008-09 and with Chinese costs rising, poor quality and substitutes available from other countries, they are losing competitiveness.

How could this implosion happen? Suddenly there's too much of everything. China's Minister of Agriculture has often talked of "rigid" growth in demand that necessitates big expansion of production. It turns out demand isn't as rigid as supposed. There apparently was a lot of waste in China's food consumption process--exposed by the order to cut back on official banqueting, travel, and special cafeterias for officials. And when domestic prices are higher than everyone else is paying, Chinese consumers learned to economize.

After years of go-go growth, the piper must be paid. "If you build it, they will come" worked for a surprisingly long time. Big companies expanded by adding shiny new facilities all over the country, but the crude workshops in alleys and courtyards with low costs and minimal overhead stayed in business too. Nearly every industry has been saying for years that there is a big shake-out on the horizon. The squeeze of falling output prices against rigid raw material prices may finally bring the long-expected shake-out.

Now, can China make the transition to a truly market-oriented economy where supply is driven by consumer demand instead of government directives, subsidies, and make-money-fast hysteria? It looks like there will be some painful years ahead before we learn the answer.
Posted by dimsums at 9:38 AM