Since 2014, Chinese police have broken up networks of diseased pig-traders and butchers in eleven provinces, arrested 110 people, and seized 1 million kg of pork and 48,000 kg of "gutter oil." Among the miscreants are insurance agents who tip off traders on where to find dead pigs they sell at a discount to butchers who then sell the meat to consumers. 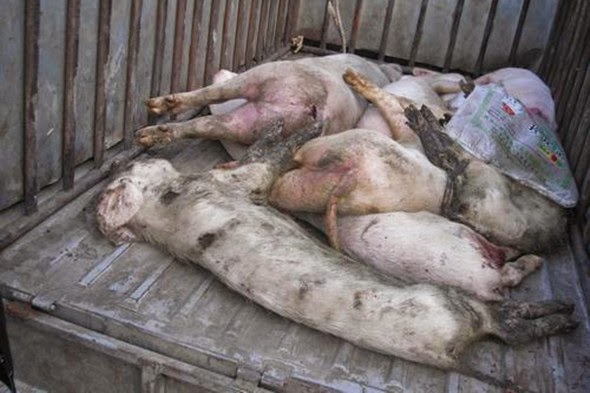 Dead pigs on the back of a truck
Jiangxi Province's Gao'an Prefecture, one of the top 100 pig-selling counties, a CCTV reporter claimed to have discovered that trade in dead pigs was an "open secret" and many of them were infected with type-A foot and mouth disease (often called "disease number 5" in China). The meat from the pigs was reportedly sold to seven provinces, including Guangdong, Hunan, Chongqing, Henan, Anhui, Jiangsu, and Shandong.

According to the report, a taxi driver named Mr. Chen has a secret identity as a dead pig trader. He allegedly got phone calls from a friend who is an insurance adjuster who tipped him off on where to find dead pigs to buy. The insurance worker reportedly got a 5 percent commission. 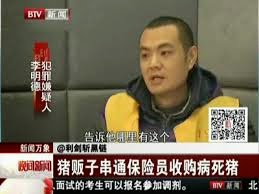 Individual arrested in dead-pig-trading sting spills the beans.
Traders got info from insurance adjusters on where to buy dead pigs.

This is not new.

Three years earlier, a similar case was exposed in Hunan Province where the director of a veterinary station informed traders where they could buy dead pigs.

In 2013, Jiangxi Province allocated 67 million yuan to subsidize disposal of dead pigs to address this problem.