With plentiful supplies of soybeans worldwide and weak demand, China's cooking oil prices have been falling for the last two years.

A Hangzhou newspaper reports that a five-liter bottle of soybean oil is under 30 yuan (about $4.90). A supermarket procurement officer estimates that retail prices in his store this December are down 40-percent from a year ago.

Cooking oil companies have been running frequent promotions with bright stickers on shelves and posters. They give away a small bottle taped to a large five-liter bottle. Early in 2014 the free bottles were 300 ml, but now companies are giving away 700 ml bottles. The supermarket procurement manager says the two biggest cooking oil companies have had two price cuts this year--one in April and the second in October--each about 10-percent.

The supermarket manager says the decline in prices is linked to declines in soybean prices on the Chicago Board of Trade. According to the National Grain and Oils Information Center, the average unit value of soybean imports fell from 3417 yuan/metric ton in September to 3268 yuan/mt in October, a 4.4-percent decline in one month.

National average prices from China's National Bureau of Statistics show that the decline in retail soybean oil prices has been more pronounced than declines in rapeseed and peanut oil prices over the past two years. 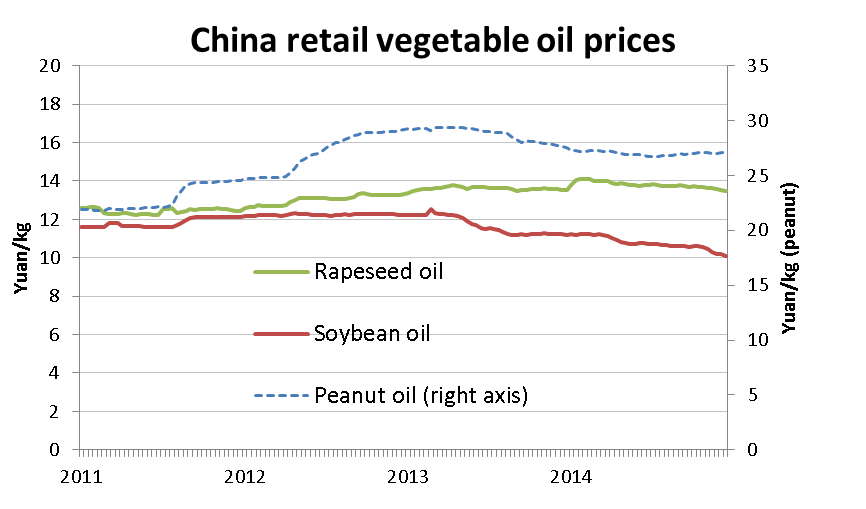 According to the Hangzhou newspaper, the unit price of imported rapeseed oil is down 28 percent from a year ago, due to a good harvest of canola in Canada. Imported rapeseed oil costs 6200 yuan/mt, much lower than the price of domestic rapeseed oil in Hubei Province of about 8250 yuan/mt. The Hubei price is down 1000 yuan from last year. The newspaper comments that the supply of vegetable oil exceeds the actual demand in the market.

Supermarket procurement officers told the Hangzhou newspaper that prices of high-end oils like corn and olive oil have not fallen as much. Most of the sales volume is in mid-to-low-end soybean oil, mixed oil, peanut and sunflower oil.

The National Grain and Oils Information Center reports that volume of soybean imports for January-October totaled 56.8 million metric tons, up 13.75 percent from the same period in 2013.
Posted by dimsums at 9:29 PM